While AMD’s consumer GPU division is well into its deployment of their first 28nm products, the long validation and certification period for business hardware means that AMD’s business GPU division is still in the process of wrapping up the last of their 40nm product launches. In November AMD launched the Turks based FirePro V4900, and today they’re launching the final member of the current generation FirePro product stack: the FirePro V3900.

For this reason the FirePro V3900 compares to the V4900 in much the same way the 6570 and 6670 do. While the V3900 has a lower core clock (650MHz vs. 800MHz), it’s otherwise a fully functional Turks GPU just like the V4900. The bigger reason for their performance difference is that while the V4900 uses GDDR5, the V3900 uses DDR3, giving it less than half the memory bandwidth and a similar overall performance drop compared to the V4900. 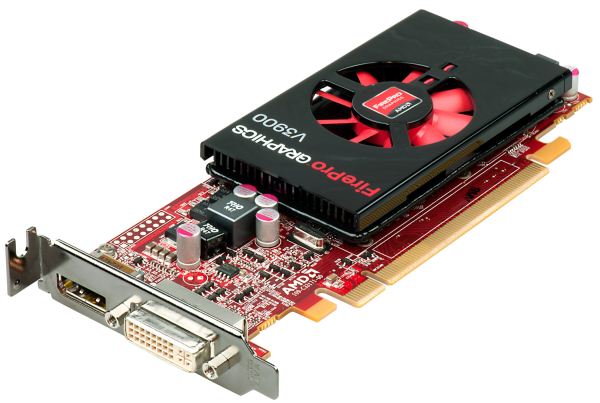 Of course the tradeoff for this drop in performance is size and power consumption. While the V4900 was a full profile card rated for 75W the V3900 is a low-profile card rated for 50W, with most of those power savings coming from switching out GDDR5 for DDR3. This makes the V3900 unique in that it’s the only low-profile FirePro card in AMD’s lineup – though it should be noted that for compatibility purposes it will be shipping with its full-profile bracket installed while the low-profile bracket will be in the box.

AMD will be releasing the V3900 today, with a price of $119. This positions it directly against NVIDIA’s GT216 based Quadro 400, and roughly $50 below NVIDIA’s GF108 based Quadro 600. For the V3900 AMD will be heavily leaning upon the fact that Turks can drive 5 monitors. However as with the V4900 this feature is effectively MIA until DisplayPort MST hubs ship this summer, as without the hub the card can only drive up to 2 monitors via its DP 1.2 and DL-DVI ports.

More immediately, on paper the V3900 should be far more powerful than the architecturally ancient Quadro 400. But as this is the professional market AMD’s real competition is NVIDIA’s certification and support, more so than their performance at any given price.

On that note, since AMD already launched a Turks based FirePro last year the certification process should be rather straightforward. Products (rather than GPUs) are individually certified, but as AMD already worked out any Turks driver kinks for the V4900 there shouldn’t be any surprises in store for the V3900.

Finally, it’s interesting to note that with this launch AMD has effectively committed to keeping Turks around for quite some time. AMD’s 3 year FirePro lifecycle means that the V3900 will be available until at least February of 2015, some 4 years after the first Turks products launched. Given Turks’ continual recurrence through 2012 in OEM laptops, desktops, and now professional cards, it’s clear that it’s living up to its position of being AMD’s low cost, high volume anchor GPU for the 40nm generation.