It’s a bit sad, really: SATA 6Gbps ony a couple years old and already we’re seeing SSDs push the limits of the interface. While the SATA spec will eventually be updated to support even higher bandwidths, right now companies looking for higher performance need to find other solutions. Several are moving to direct interfaces via PCIe, where even an x4 configuration can offer over three times the bandwidth of SATA 6Gbps. OCZ has the RevoDrive line, and Super Talent has their RAIDDrive. Super Talent had two new models of RAIDDrive on display at CES; the basic model is the upStream 480GB with up to four SSD controllers (SandForce 2200) while the RAIDDrive II supports up to 2TB and eight SF-2200 controllers. 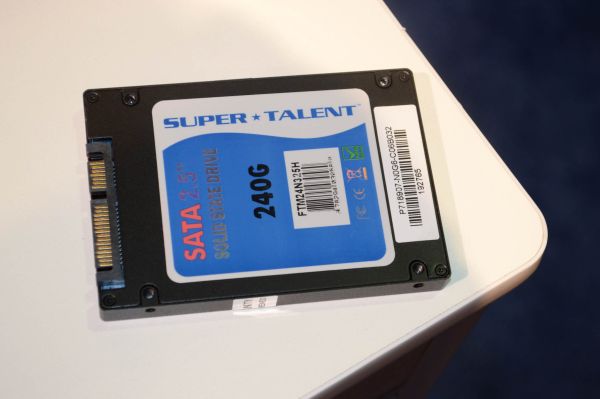 Besides the RAIDDrive cards, Super Talent also had a new SF-2200 SSD brand with the latest gold level firmware on display, the TeraNova. Super Talent mentioned that many SSDs are actually out of spec in their SATA and power connector areas, with the PCB being too close to the connectors and making the SSDs unable to fit properly in hotswap drive bays; the TeraNova has the PCB cut out around the connectors so this won't be an issue.

Super Talent had some benchmarks running to demonstrate the performance potential of the three SSDs, and we grabbed some pictures of their ATTO results that you can see in the gallery. The quick summary is that the single SF-2200 controller in the TeraNova 240GB is able to hit read/write speeds of up to 545/518MB/s, which is similar to what we’ve seen on other SandForce SSDs. Move to the upStream 480GB RAIDDrive and read speeds can break the 1GB/s barrier and top out at 1021MB/s while write speeds topped out at 951MB/s. Finally, the RAIDDrive II (I’m not sure of the size, but I believe it was the 1TB model) more than doubles that on the read speeds at rates of up to 2613MB/s and writes speeds of 1637MB/s. Obviously these are sequential transfer rates, but even so you’ll need to be running workloads for more intense than desktop use before you’re really going to benefit from that much I/O performance. 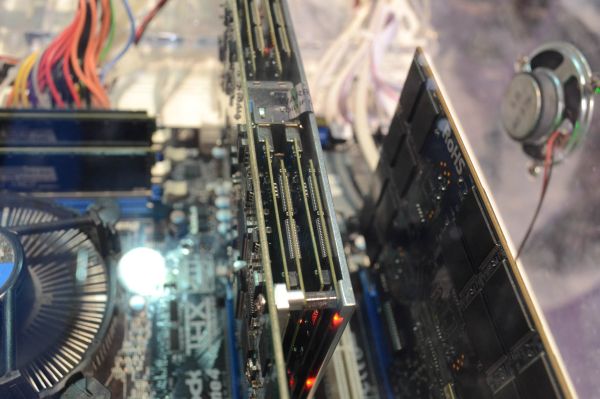 One of the interesting elements of the RAIDDrive II is how Super Talent adds the SSDs to the board. Each SSD module consists of two PCBs, with the SF-2200 on one board and the NAND flash on the other. The board with the controller also contains a USB to SATA bridge chip, and the cards use USB 3.0 connections and plug into the main RAIDDrive II board. Small LEDs on the surface of the board also show which SSD modules are currently active. There’s also 64MB of RAM on the main PCB and a heatsink and small fan used to cool the RAID chip—I’m not sure what chip Super Talent is using, though I’ll try to find out.