On the sound card front, Creative is still pushing the Sound Blaster Live! series of cards, so don't expect to see anything more than basic variations on the Live! design in the near future.

Aureal had their upcoming SQ3500 Turbo sound card and 4.1 channel speaker system on display. The first thing we noticed about the SQ3500 was that it looked just like the current Vortex 2 based SQ2500 with a daughter card added on. It turns out that the daughter card is the only addition, but it is a biggie, adding a 100MHz Motorolla DSP56362.

The DSP on the daughter card, in conjunction with the AU8830 Vortex 2 chip on the main board, allows for full hardware acceleration of A3D 3.0. A3D 3.0 adds quite a few features, include Dolby Digital AC-3 support and hardware reverb. Dolby Digital decoding in hardware will be a boon for users who like to watch DVD movies on their computer. The decoder should allow for a 4 speaker down-mixed output of Dolby Digital's 5.1 channel audio. With support for Dolby Digital AC-3 built in to A3D 3.0, we should hopefully see titles early next year with Dolby Digital support. Further, expect CPU utilization on the SQ3500 to be a good bit lower than the SQ2500, as even more of the A3D pipeline will be accelerated in hardware thanks to the DSP.

Since the difference between the SQ3500 and the SQ2500 is just a daughter card, the big question is whether or not Aureal will offer an upgrade for SQ2500 owners. No decision has been made as of yet, but, at the very least, it should be possible. Unfortunately, it won't be possible to upgrade any of the other Vortex 2 boards out there, such as the Diamond MX300, the Xitel Storm Platinum, or the OEM Aureal Super Quad Digital PCI. These cards simply lack the header necessary to interface with the new daughter card.

While we were there, Aureal also let us know that they were still working on drivers with EAX support for Vortex 2 cards. They expect those to be available by mid-December.

Complementing the SQ3500 was Aureal’s new speaker package, the XL series. While it was impossible to tell how these speakers sound with so much commotion going on around us, the specifications are pretty impressive. Available in 2.1 and 4.1 configurations, these speakers pump out 50W per satellite and 100W to the sub. A single control on the right satellite controls volume, bass, treble, balance, and fader. Both models will be available early next year at $349 for the 2.1 system and $399 for the 4.1 setup.

Diamond was showing the next in their Monster Sound series of cards, the MX400. When Aureal decided they were going to start selling boards under their own name, Diamond decided to get with ESS for their next sound card.

The MX400 will feature the Canyon3D chipset, which offers support for A3D 1.0 and EAX 1.0 & 2.0. There are four analog speaker outputs and a digital coax S/PDIF output. A feature connector onboard offers upgradability to a hardware MP3 encoder/decoder and a FM tuner.

Dolby Digital output is supported on the MX400, but only through the digital coax S/PDIF output, so the AC-3 data from a DVD is simply passed on to this output and no actual decoding is done on the card.

Turtle Beach is also going with a non-Aureal chip for their next card, currently named Santa Cruz. Current plans call for a "programmable DSP," but they wouldn’t disclose the manufacturer of that DSP. Details are sketchy, but hardware MP3 decoding was mentioned, which should enable in-game MP3 music without a significant performance hit. However, we do know that they will be using Sensaura’s 3D audio algorithms. 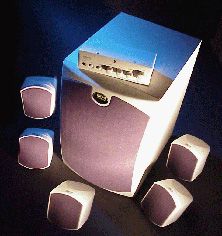 Don’t forget to check out our Comdex 99 Coverage Part 2 for details on Altec Lansing and Video Logic’s upcoming speaker products.