Out of box, the Sceptre is imposing (though not so much that you’d want to use it as an ornamental staff). That said, there’s no arguing that 27” isn’t monstrous for an LCD display. Packaging is sufficient and of the styrofoam kind - extracting the big panel isn’t a problem, and doesn’t seem to lend itself to being damaged easily. 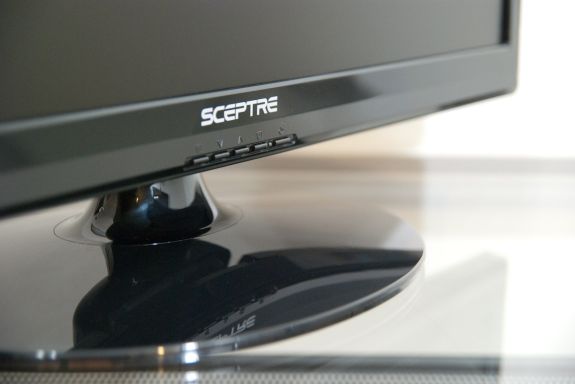 The display stand is basic - assembly consists of sliding the panel into one piece which then snaps into the circular plastic base. It’s sufficient to hold the display firmly in place, but doesn’t offer any ergonomic options outside of vertical tilt, about 20 degrees is all you get. Keep in mind on a large panel a small amount of tilt feels like a lot because of how much motion there is out at the extreme, but the 20 degrees of travel here lets you get between perfectly vertical, and comfortably tilted upward. There isn’t any height adjustment, swivel, or rotation. The option (tilt) you get is spartan, but the display stand feels firm and works adequately enough that typing on the same desk doesn’t result in some monitor shake starting. That weird kind of monitor tilt resonance can get really annoying, especially on cheaper display stands. There’s a standard 100mm VESA mount, so you can bring your own better stand if you so choose.

My only major complaint with the physical design of the Sceptre is that making connectors are given surprisingly little clearance on the back panel. Connecting my relatively chunky dual link DVI cable to the X270W, I had to bend the cable a bit sharply for it to clear the plastic stand. The single link cable supplied in-box has a noticeably smaller connector, so you won’t run into this issue if you use theirs, but be careful if you’ve got some pre-run, fatter DVI-D cables like mine. 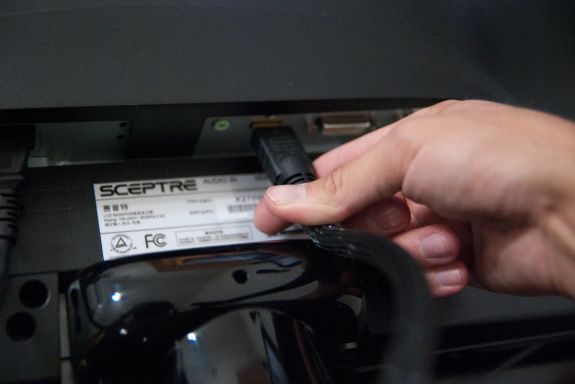 Things got a bit worse with the HDMI cables I had on hand, which admittedly have over-engineered cable strain relief and cause all sorts of problems on other displays - these didn’t fit at all and certainly would’ve broken the port inside if I shoved any further. I guess what I’m getting at is that it’d be nice to see a cable management clip or some routing guidance here, and no obstruction preventing you from bringing any cable down and out. At the end of the day, I wound up grabbing some other HDMI cables.

We’ve already talked about the 1080P display resolution and subsequent 16:9 aspect ratio choice. There’s not much to be said other than that 1920x1200 is quickly becoming the exception to the rule, whether you like it or not. For a monitor packing HDMI which will likely be driven at HD resolutions, there’s definitely an argument in favor of 16:9.

The front panel has the OSD controls centered below the Sceptre logo - there are 5 buttons. Four for navigation, one for power. We’ll talk about the OSD menus at the end of the review, but Sceptre’s options are again a bit spartan and just a little confusing - especially for changing volume, but we’ve seen them before. 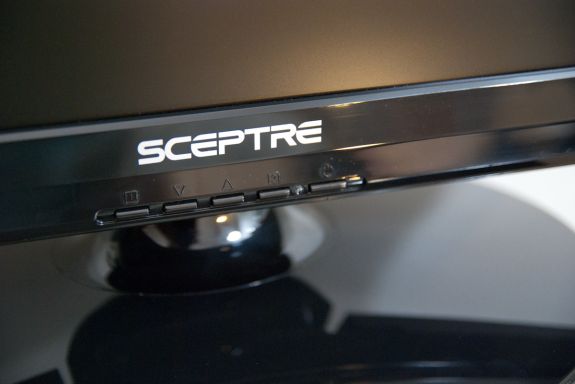 Power on lag is respectable - from cold boot to 1080P HDMI display in just over 10 seconds. Switching inputs is very fast - nearly instantaneous. The rest of the controls are responsive, though in HDMI mode it does seem like the menus occasionally were a bit slower than over DVI.

Viewing angles are the standard news for a TN panel - very good until you’re viewing the display at an extreme angle. In fact, the only notably bad angle (as with most TNs) is at an extreme negative angle, viewing the monitor from below. Again, that’s to be expected.

All important display quality isn’t perfect out of box, but gets surprisingly good after you calibrate and tune the display’s somewhat outmoded OSD. We did discover one unobtrusive dead pixel, though it seems to come in and out of being a problem.

Overall first impressions are pretty good: The X270W does what it’s supposed to do, and as we’ll see later, does a relatively good job tracking colors and being uniform. It’s a mammoth display, but again dot pitch is a bit bigger than we’re used to.