Benchmarks such as ATTO and CrystalDiskMark provide a quick look at the performance of the direct-attached storage device. The results translate to the instantaneous performance numbers that consumers can expect for specific workloads, but do not account for changes in behavior when the unit is subject to long-term conditioning and/or thermal throttling. Yet another use of these synthetic benchmarks is the ability to gather information regarding support for specific storage device features that affect performance.

Kingston claims read and write speeds of 1000 MBps and 900 MBps respectively for the DTMAX series. While the 1TB DTMax Type-C managed to hit that in the ATTO benchmarks, our chosen workloads don't see the DTMAXA SKUs hitting it - not even in the 1TB version. Writes top out around 650 MBps, while the reads do go close to 1000 MBps. ATTO benchmarking is restricted to a single configuration in terms of queue depth, and is only representative of a small sub-set of real-world workloads. It does allow the visualization of change in transfer rates as the I/O size changes. Even though screenshots are not shown here, setting the ATTO benchmark's queue depth to 8 (instead of the 4 we usually use) allows the numbers in the graph to go beyond even Kingston's advertised claims. That said, it is evident that the DT Max Type-C 1TB we evaluated last year is not exactly the same performance-wise as the new DTMAXA/1TB.

The numbers here match Kingston's advertised claims - the DT Max Type-C and Type-A 1TB UFDs behave pretty much the same. The 512GB and 1TB SKUs exceed the advertised numbers. However, the 256GB version suffers on the write side, hitting a peak slightly south of 800 MBps. For the same access trace, the 512GB and 1TB SKUs reach almost 1 GBps. This is likely due to the non-availability of enough flash packages to access parallely in the 256GB SKU. 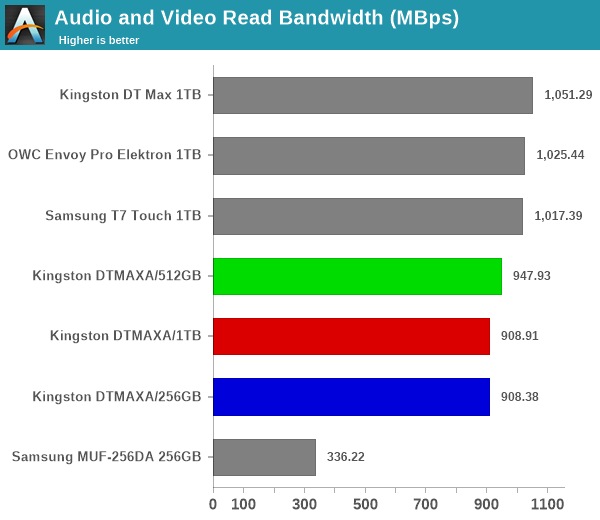 The read workloads see all the DTMAXA drives performing quite well and being very close to the leader of the pack. On the write side, the 256GB SKU fares quite badly, as the SLC cache exhaustion coupled with insufficient time for folding makes it fare worse than even the Samsung MUF-256DA Type-C thumb drive. The 512GB and 1TB SKUs perform quite well, with the queue depth issue seen in the ATTO workload not making that much of a dent for real-world performance.

-Power users may want to dig deeper to understand the limits of each device. To address this concern, we also instrumented our evaluation scheme for determining performance consistency.

The key comparison here is between the DT Max A 1TB and the DT Max 1TB. Due to the queue depth issue, default write performance for the DT Max A starts off slightly north of 600 MBps, while the Type-C version starts off above 900 MBps. This negatively impacts the Type-C version towards the end - after the temperature hits 90C+, the read speeds drop down to the 550 MBps range. On the other hand, the new Type-A 1TB SKU manages to retain the high read performance all through - the temperature at the end was 80C (and the last read set started at 74C). Thus, the comparatively slow writes help in the thermal performance for the new drives.

There are a number of storage benchmarks that can subject a device to artificial access traces by varying the mix of reads and writes, the access block sizes, and the queue depth / number of outstanding data requests. We saw results from two popular ones - ATTO, and CrystalDiskMark - in a previous section. More serious benchmarks, however, actually replicate access traces from real-world workloads to determine the suitability of a particular device for a particular workload. Real-world access traces may be used for simulating the behavior of computing activities that are limited by storage performance. Examples include booting an operating system or loading a particular game from the disk. 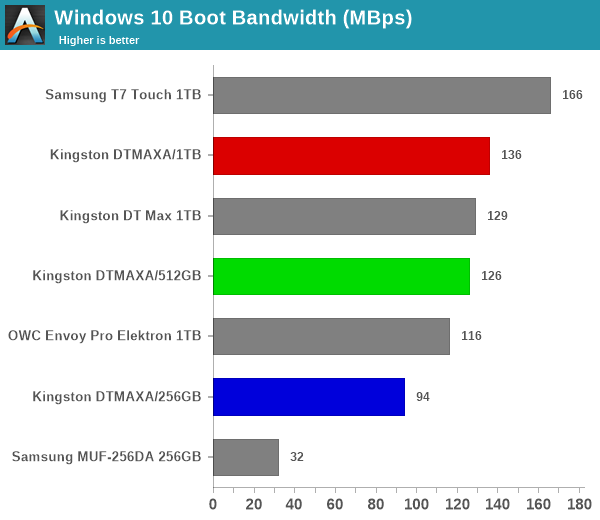 Being read-intensive, all three DTMAXA drives do well in the OS booting access trace. 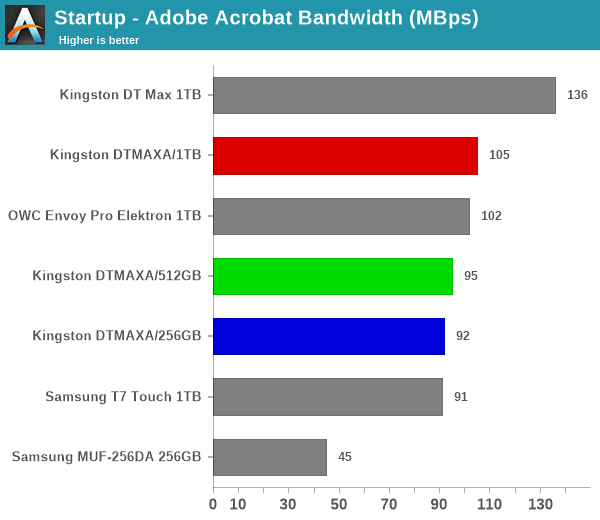 The DTMAXA drives perform reasonably well, making an appearance in the middle of the pack and without any suspiciously small scores. The DT Max Type-C and Type-A drives perform similarly, with the Type-C version enjoying a slight edge all through. 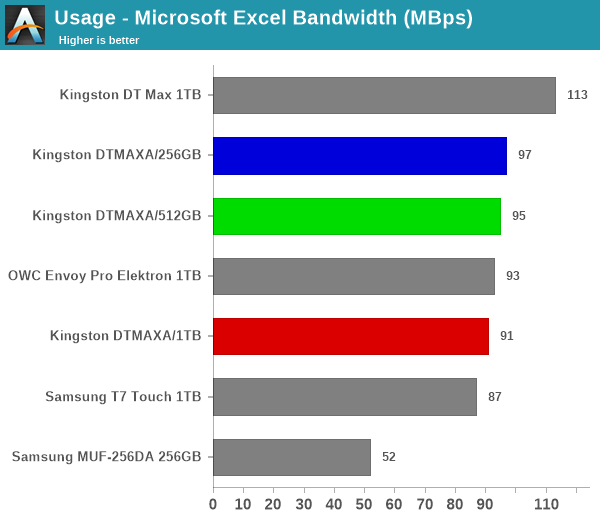 The DTMAXA series performs quite well given the use of a native UFD controller. However, the Type-C drive's firmware / flash combination gives it the edge in office workloads. 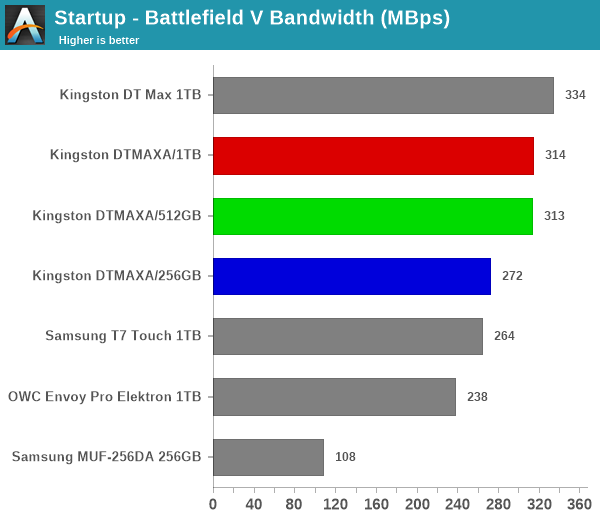 The read-intensive nature of gaming workloads are more in tune with the DT Max use-cases. Even though the DTMAXA SKUs appear in the top half, it is the Type-C UFD that enjoys a clear lead. 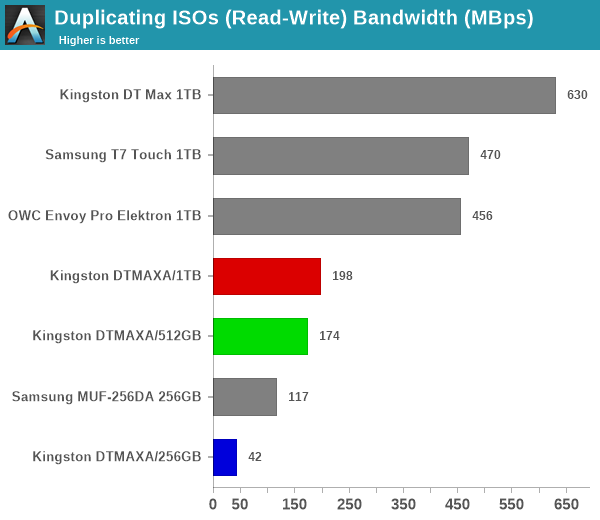 A combination of thermal throttling and SLC cache run-out throttling yields the above results for various SSDs. The trend is overall the same - the Type-C version outperforms the Type-A version. Read-centric workloads are welcome across the board by the DTMAXA series. On the write front, bridge-based SSDs as well as the Type-C DT Max 1TB enjoy a commanding lead. 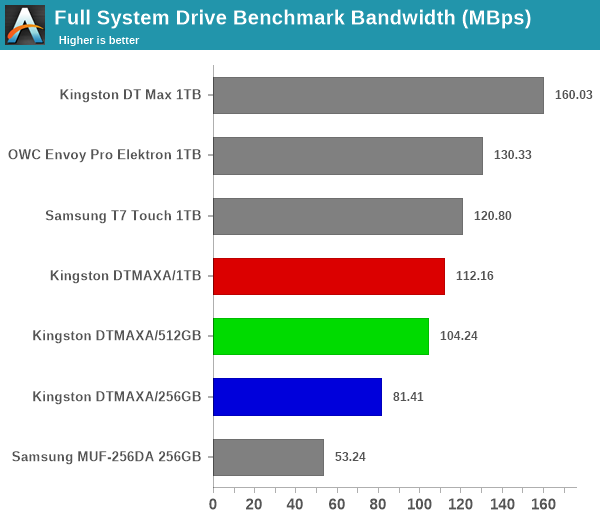 As expected, the DTMAXA series lands in the middle of the pack, with the 1TB outperforming the 512GB, and that in turn outperforms the 256GB SKU. The Type-C UFD emerges as the leader despite the presence of a couple of bridge-based SSD solutions in the mix. The new Type-A version is behind those, though