Benchmarks such as ATTO and CrystalDiskMark help provide a quick look at the performance of the direct-attached storage device. The results translate to the instantaneous performance numbers that consumers can expect for specific workloads, but do not account for changes in behavior when the unit is subject to long-term conditioning and/or thermal throttling. Yet another use of these synthetic benchmarks is the ability to gather information regarding support for specific storage device features that affect performance.

Samsung claims read and write speeds of 1050 MBps and 1000 MBps respectively, and these are backed up by the ATTO benchmarks provided below. ATTO benchmarking is restricted to a single configuration in terms of queue depth, and is only representative of a small sub-set of real-world workloads. It does allow the visualization of change in transfer rates as the I/O size changes, with optimal performance being reached around 256KB for a queue depth of 4.

The numbers from CrystalDiskMark are more than those claimed by Samsung, but typical of similar PSSDs which tend to excel in short-duration sequential workloads. Both NCQ and UASP are supported. 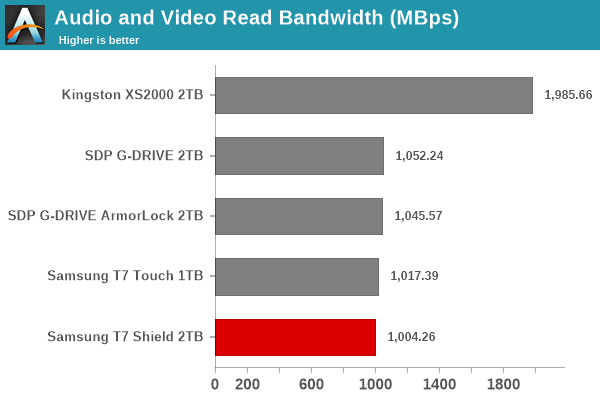 The Kingston XS2000 is the leader in all the workloads, but that is to be expected, given its USB 3.2 Gen 2x2 (20 Gbps) interface. If the XS2000 is ignored, It can be seen that there is no significant gulf in the numbers between the different units across all the workloads - in fact, most are within the run-to-run variations. For all practical purposes, the casual user will notice no difference between them in the course of normal usage. However, power users may want to dig deeper to understand the limits of each device. To address this concern, we also instrumented our evaluation scheme for determining performance consistency.

We can see that the T7 Shield starts off a bit slow in the Home suite (with the small-sized files) compared to other PSSDs. However, in the disk-to-disk set, it is able to maintain close to 1GBps performance without falling off the cliff after running out of the SLC cache. In fact, the drop in the rate towards the end is more due to small-sized files, rather than a SLC cliff. Despite ensuring close to peak performance all through, the temperature at the end was just 54C.

There are a number of storage benchmarks that can subject a device to artificial access traces by varying the mix of reads and writes, the access block sizes, and the queue depth / number of outstanding data requests. We saw results from two popular ones - ATTO, and CrystalDiskMark - in a previous sub-section. More serious benchmarks, however, actually replicate access traces from real-world workloads to determine the suitability of a particular device for a particular workload. Real-world access traces may be used for simulating the behavior of computing activities that are limited by storage performance. Examples include booting an operating system or loading a particular game from the disk. 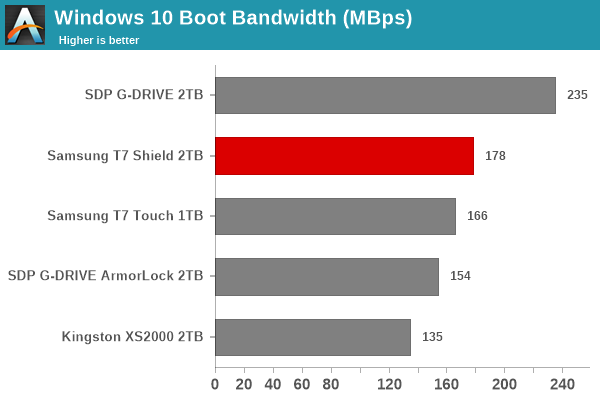 This workload rewards SSDs that have low read latencies, and the raw interface speed matters much less. The T7 Shield is among the top performers in that metric. 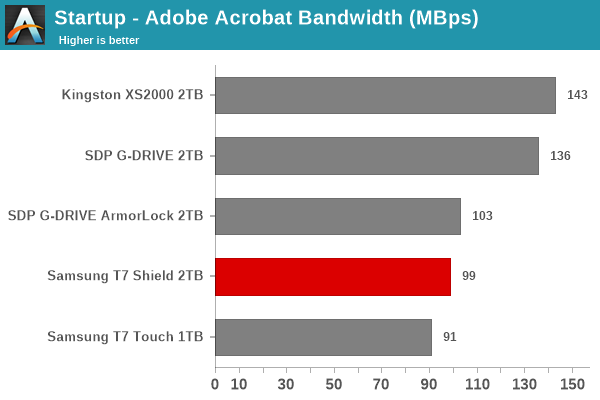 The performance in these workloads depends on the raw interface speed, and the capabilities of the internal SSD. The top drives are either those with a 20 Gbps interface, or ones with DRAM-equipped internal SSDs. Since the T7 Shield is a DRAM-less PSSD, it comes in the middle of the pack. 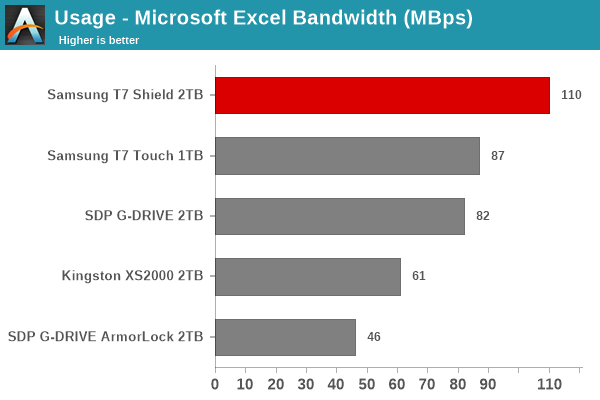 While the T7 Shield comes out on top in the Excel workload, it comes in last in the Powerpoint one - performance variations representative of the type of workloads that the PSSD firmware is tuned to. 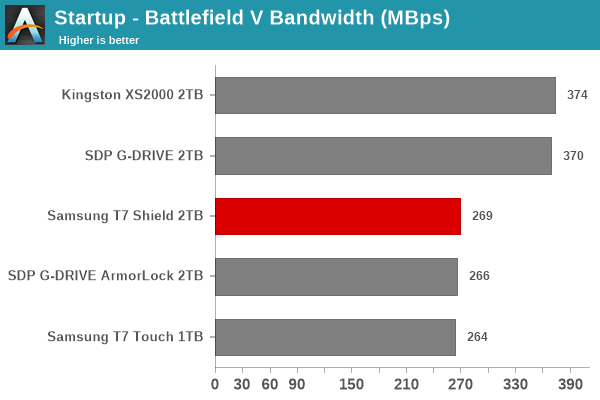 Most of the gaming benchmark traces reward raw interface speeds, and so it is not surprising to see the XS2000 come out on top. The DRAM-equipped G-DRIVE also performs admirably. Among the other three PSSDs, there is not much to differentiate. 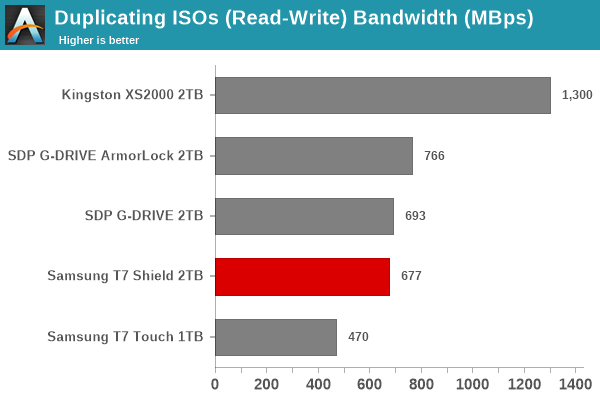 Results in this workload set are similar to the ones we observed in the AnandTech DAS Suite. The T7 Shield comes in the middle of the pack right through. 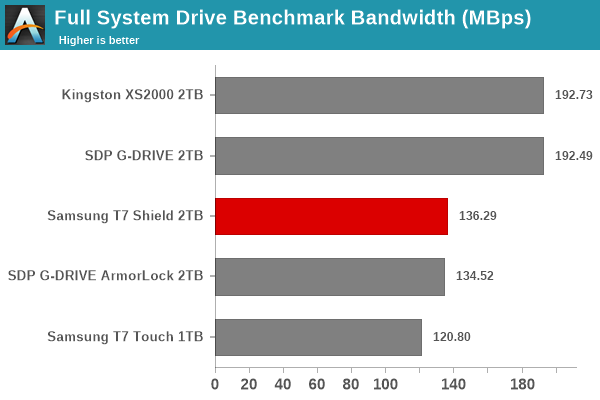 The Samsung T7 Shield lands right in the middle of the pack. Among the 1GBps-class PSSDs, the drive loses out only to the DRAM-equipped SanDisk Professional G-DRIVE.