The combination of Intel’s ability to drive 10nm product onto the shelves coupled with silicon supply chain shortages has put into question exactly what might be coming into the market later this year on the client side of the business. A few weeks ago Intel stated that across the company five CPU platforms would be coming to market in 2021: Rocket Lake, Jasper Lake, Ice Lake Xeon, Alder Lake, and the Tiger Lake-H series of processors. Tiger Lake-H at 45W+ will come to market in Q2, however AnandTech has learned and confirmed that later in 2021 Intel will also be launching a refresh of its notebook 15-28W Tiger Lake-U processors as well, called TGL-R.

The original Tiger Lake-U family was launched in September 2020 using Intel’s 10nm SuperFin manufacturing process. The silicon design used four of Intel’s latest Willow Cove processor cores, with the top 28 W model offering a turbo frequency up to 4.8 GHz and a base frequency of 3.0 GHz. Tiger Lake also enables 96 execution units of the new Xe-LP graphics technology, up to 1350 MHz, with support for DDR4-3200 and LPDDR4X-4266.

Technically Intel stated that Tiger Lake-U also supported LPDDR5-5400 when the product was launched, however we have not seen a Tiger Lake-U design with this feature. A Tiger Lake-Refresh might have this key feature enabled with a new family of processors, alongside minor frequency increases as Intel is able to optimize its 10nm SuperFin manufacturing process. 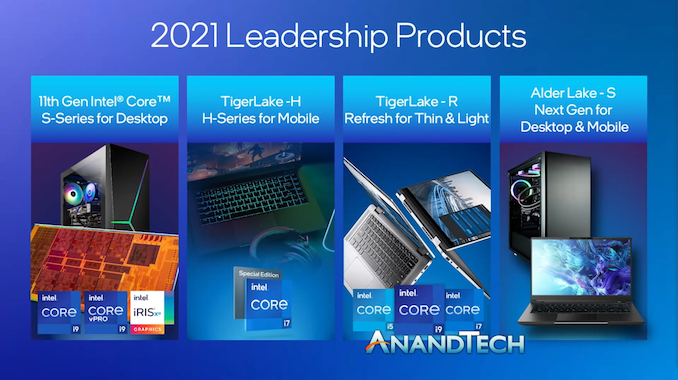 During Intel’s presentation where TGL-U refresh was mentioned, it was specified that the refresh will only apply for 15-28 W processors. Earlier this year Intel launched TGL-H35, which is a misleading name as it uses the U-series processors but brings them up to 35 W (the name suggests a 45W H-series processor reduced in power, but it isn’t). Going on what was presented, these 35W versions of the U-series silicon will not get an equivalent refresh, at least based on this slide talking specifically about 2021.

There are two ways to think about Intel launching TGL-R.

First is that Intel has already announced that its next-generation Alder Lake processors, using a Core + Atom hybrid design, will be coming out later this year for mobile and desktop. That platform would seem to benefit heavily from having the high-efficiency Atom cores in notebook designs more than a TGL refresh. It would seem odd for Intel to offer a Tiger Lake-U refresh if Alder Lake was close to being ready; and so one might conclude that the mobile versions of Alder Lake are more of a late Q4 discussion.

The second is the LPDDR5 angle, assuming that is working. Intel may now have validated the silicon for LPDDR5-5600 which might not have been possible when TGL-U was launched, or LPDDR5 availability may now be at a level that Intel’s OEM partners can deploy it at a reasonable cost. A fully populated LPDDR5-5600 mobile processor would enable a peak memory bandwidth of 89.6 GB/s, which is 75% above DDR4-3200 or 31% above LPDDR4X-4267. For graphics workloads, this would surely boost performance.

If Intel doesn't have LPDDR5 systems with TGL-R, then we fully expect the new line of processors to solely have frequency updates.