But Coffee Lake's time on the market is getting ready to sunset, and thus so are the chipsets that support it. 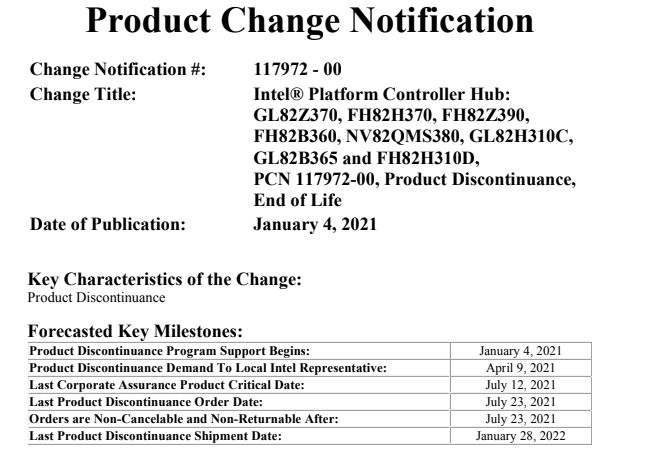 Outlining its discontinuance plan until the last shipping date expected on or before January 28th 2022, Intel advises its customers to make its final orders by July 23rd 2021.

Perhaps one of the most critical elements of the end of life plan is the H310 chipset. This is a chipset designed for longevity with three variations, including H310 and H310D based on 14 nm and the H310C built on 22 nm. It could be that the H310 chipset wasn't as popular as expected, especially compared to the H81 chipset, which lasted over 7 years before it was discontinued.

The Intel 300-series chipset has since been replaced by the 400-series desktop chipset, including Z490, W480, H470, B460, and Q470. These chipsets introduced support for Intel's Comet Lake (10th gen Core) processors, and their associated LGA 1200 socket. There have also been many rumors circulating that Intel's latest 500-series chipsets will be announced during CES, with Intel finally offering PCIe 4.0 with its new 14 nm Rocket Lake processors are expected towards the end of Q1.