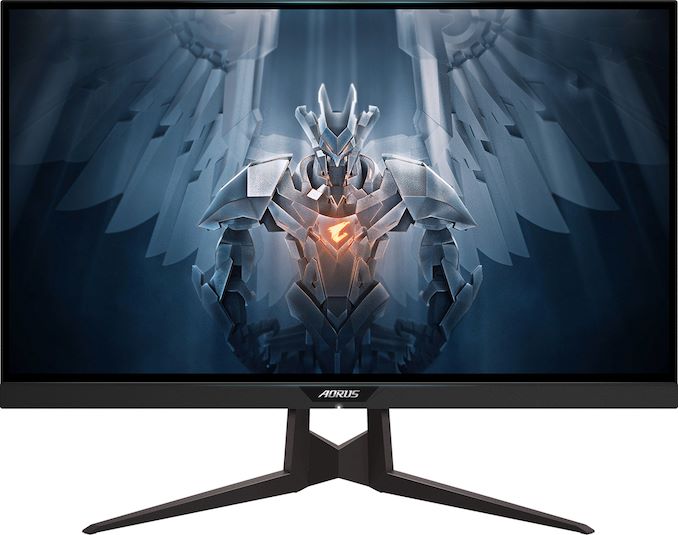 GIGABYTE has introduced its 2nd Generation 27-inch ‘tactical’ display for gamers, updating the display to offer a maximum refresh rate of 165 Hz. The Aorus FI27Q monitor continues to use a high-quality IPS panel and supports a variety of premium features, including VESA adaptive-sync and noise cancellation. Meanwhile, the new LCD is $50 cheaper than its predecessor from last year. Meanwhile, GIGABYTE also announced the Aorus FI27Q-P monitor that has a DisplayPort 1.4 input and some other feature set improvements.

The GIGABYTE Aorus FI27Q is based on a 2560×1440 resolution 8-bit+FRC IPS panel, which offers 350 nits max luminance, a 1000:1 contrast ratio, 178/178 viewing angles, a 1 ms MPRT response time, and a maximum refresh rate of 165 Hz. As you'd expect from such a high refresh rate monitor, the display supports VESA's adaptive-sync variable refresh technology, and is both AMD FreeSync Premium and NVIDIA G-Sync Compatible certified. The LCD also supports GIGABYTE’s Aim Stabilizer technology that reduces motion blur and promises to make fast-paced scenes look sharper, though it is unclear whether it works with variable refresh rates.

Courtesy to its high-quality panel, the Aorus FI27Q monitor can display 95% of the DCI-P3 color gamut and supports HDR mode (presumably using HDR10 transport, but GIGABYTE has not formally confirmed this). Though don't expect the latter to provide a really good HDR experience, given the mediocre brightness.

Being one of the leading makers of computer components, GIGABYTE offers a wide range of products aimed at virtually all segments of the market. But a notable exception to this has been displays, where the company is focusing on the high-end segment and loading its monitors up with extra features. Among other features on the FI27Q is active noise cancellation (ANC) technology for any headset connected to the display, OSD Sidekick to control display options using a keyboard and a mouse, Dashboard to display hardware-related information on top, custom crosshairs, and game profiles. 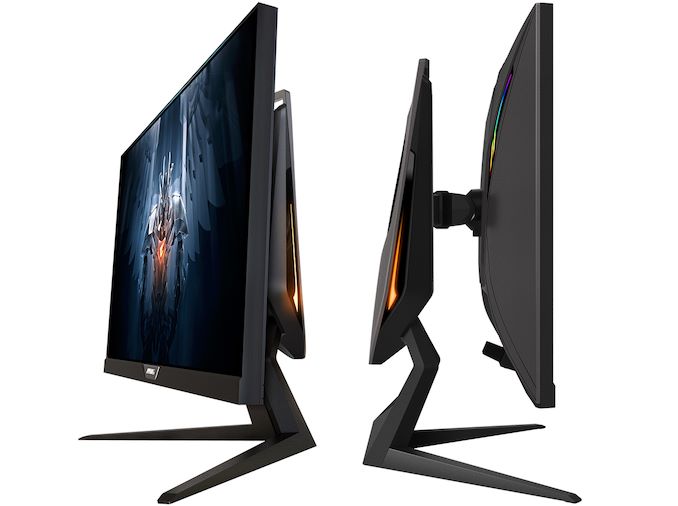 As far as connectivity is concerned, the Aorus FI27Q display has a DisplayPort 1.2 input, two HDMI 2.0 ports, and audio connectors. Ergonomics-wise, the monitor comes with a stand designed after a falcon and featuring multiple addressable RGB LEDs that can adjust the display’s height, tilt, and swivel. In addition, the LCD has VESA 100mm×100mm mounting holes.

It is noteworthy that GIGABYTE is also offering the Aorus FI27Q-P monitor with a DisplayPort 1.4, which essentially means that the monitor can support a 10-bit input at the monitor's full resolution and 165 Hz refresh rate. By contrast, the Aorus FI27Q only supports an 8-bit input for this scenario due to DP 1.2 bandwidth limitations. In addition, the -P version also comes with ANC 2.0 and Black Equalizer 2.0.

The GIGABYTE Aorus FI27Q (and perhaps FI27Q-P) display is now available from retailers like Amazon and Newegg for $549, which is $50 lower compared to the launch price of the Aorus AD27QD.