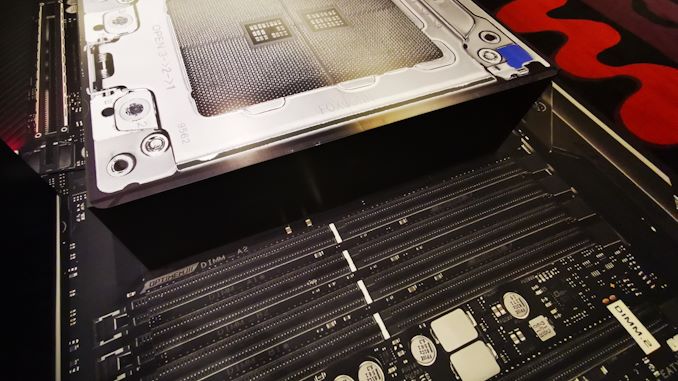 For anyone that isn’t following the minutiae of desktop computing, one of the more prominent rumors in AMD land is the presence of upcoming sockets called TRX80 and WRX80. These parts, assumed to be aimed at ‘casual’ and ‘workstation’ users, have formed the basis of many rumors and a lot of speculation, especially on the back of TRX40 which does exist for the latest generation of AMD Threadripper CPUs. Similarly, recent news has been posted about the potential existence of a theoretical LGA1159 socket for Intel, despite the fact that LGA1200 is often cited as the next generation socket for upcoming Comet Lake processors on the desktop. We reached out to a few contacts while we were here at CES to put some weight into these rumors, to confirm them one way or the other, for good.

It’s at this point I want to talk about sources. For anyone who has studied journalism, or even history at a high school level, there is the concept of sources carrying different amounts of weight. A primary source, for example, would be a direct participant in an event who would be able to recount with specific detail what they did/saw or what is planned. A secondary source might be a journalist collating or analyzing data from primary sources, a piece of software including a list of details about other products, or an artist depicting the events taking place from information they have collected. Tertiary sources go beyond this, and might involve individuals discussing an event without any direct experience of a specific instance. When it comes to the journalism that the tech press practices, depending on the publication, different numbers and different levels of sources form the minimum requirements for each publication. This acts as the minimum barrier required in order to present the information to its readers.

Here at AnandTech, we often use at least two sources for any particular story, preferably both primary sources. If the second source is trusted, for example a fellow media peer in the industry that has a history of accuracy and one that we trust, they can be treated similarly to a primary source, albeit technically a secondary source (we often try to find a separate primary source different to the one they have used). Sometimes we have a lower standard for entry for the sake of humor, such as our report into Intel’s mythical Core i9-9900KFC, which never saw the light of day but I enjoyed writing it in a very tongue-in-cheek style (and I hope that came across). So to put this in to context, if I write something based on primary sources, I nominally act as a second source for others that cite my work.

Back to this specific matter, I had noticed that any mention of TRX80, WRX80, or LGA1159, was written about by journalists with no primary sources about any of it. So in order to find out when these two AMD eight-channel chipsets were going to come out, as well as the existence of yet another consumer Intel socket, I naturally went to ask AMD, Intel, as well as their primary partners and OEMs. The partners and OEMs that work with Intel and AMD are involved in developing and selling future platforms, and as such they have insight into the next 6-9 months of products coming into the market. They also have ideas about the 9-18 month schedule, but as we’ve seen in the past, that is often subject to change. Obviously none of the companies we spoke to were prepared to speak about future products, such as their own LGA1200 motherboards, however that doesn’t apply here.

All of our primary sources in this regard had very puzzled looks on their faces when I mentioned either the TRX80, WRX80, or LGA1159. One of them looked at me in amazement, and specifically said ‘what are you on about?’. I explained the situation, with ‘the internet’ talking about new 8-channel consumer motherboards, or an updated socket for Intel’s Comet Lake and beyond. The answer I got was very clear cut from everyone I talked to: no-where on their roadmaps has it ever said TRX80, WRX80, or LGA1159. None of the companies I talked had even heard of these names, let alone had any products with these features in the pipeline.

On the LGA1159 socket, one source actually knew what I was talking about, at least to some degree. They stated that the reason why people are confused here is that Intel distributed some early engineering samples of six-core Comet Lake CPUs in LGA1150 packaging, and those photographs got leaked onto the internet. The reason Intel could do this is that there's next to no difference between Coffee Lake Refresh and Comet Lake silicon, and as a result some early testing could be done. However, the same source also showed us the different packaging for the 10-core engineering sample, where the layout is somewhat different. As it stands, this is the issue with assuming what you see is always going to be at retail - if the fact that something is an engineering sample isn't taken into account, perhaps you shouldn't write about every rumor you see or hear.

But does this mean that there will never be a product called TRX80, WRX80, or have the LGA1159 socket? No. But what I am told from my sources is that as it stands these products have never existed. There might be a future LGA1159 socket for Intel CPUs, or future upgraded motherboards for AMD CPUs, but as it stands, all of my contacts confirmed that none of them exist on roadmaps today.

It should be pointed out that our sources did request anonymity. This is par for the course for this sort of response, even when confirming when a particular ‘product’ doesn’t exist. Should these sources be able to provide information about actual future products, and I may wish to call upon them again, and they'd rather not act as a magnet for future questions from all the other tech media.