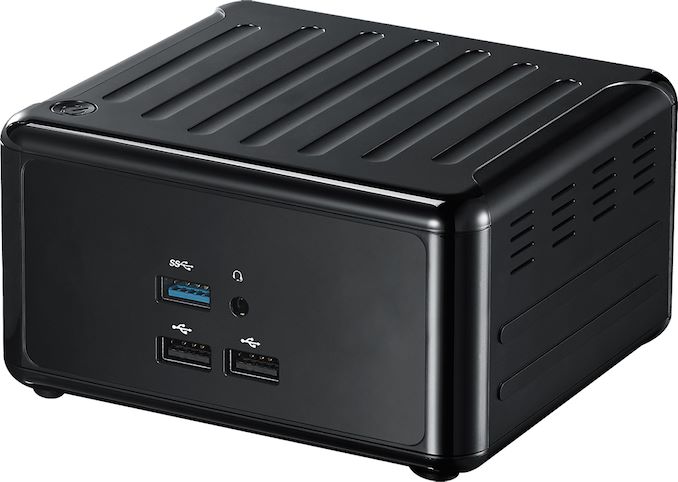 While AMD's Ryzen Embedded APUs aren't new, the rate of adoption for them is. AMD unveiled this week that four more manufacturers are now offering ultra-compact form-factor (UCFF) PCs powered by their embedded Ryzen APUs. With systems shipping from ASRock, EEPD, OnLogic, and SimplyNUC, the small form factor boxes can be used for a wide variety of use cases, ranging from home entertainment to business and industrial applications.

AMD’s Ryzen Embedded R-series processors are rated to run for 24/7, so ASRock’s 4X4 Box-R1000M and 4X4 Box-R1000V can be used for applications that need to be always on, such as digital signage, kiosks, and so on. Meanwhile, three display outputs make ASRock's AMR Ryzen Embedded-based systems rather decent solutions for office. Finally, as the boxes include a watchdog timer and are rated to run at temperatures of up to 40ºC, the system can be used for non-extreme industrial applications.

EEPD’s ProFive NUCR with AMD’s Ryzen Embedded R1000-series APUs are rated to operate in temperature ranges between 0°C and + 60°C and with a maximum relative humidity of 95% @ 40°C (non-condensing), so they can indeede be used for a wide variety of applications. The SBCs have two SO-DIMM memory slots, three M.2 slots for SSDs or Wi-Fi modules (Type B, Type E, Type M), a SATA header, two GbE ports, two DisplayPort++ connectors, USB 3.1 Gen 1 connectors, a microSD slot, RS-232 and RS-232/485 ports, and GPIO.

The manufacturer says that in addition to embedded, commercial, and industrial applications, its ProFive NUCR with AMD’s Ryzen Embedded R1000-series APUs can be used for vehicles and mobile robots, which greatly expands use cases for the parts as these applications will see a serious growth in the coming years.

EEPD does not disclose pricing of its ProFive NUCR SBCs, but it is obvious that they depend on multiple factors, including volumes and additional options.

OnLogic uses one of AMD’s highest performing Ryzen Embedded APU model V1605B with four cores and Radeon Vega 8 graphics. The system is aimed at a range of applications, including those that need more general purpose and graphics horsepower, but may be used for embedded applications and even home entertainment too.

OnLogic’s MC510-40 AMD Ryzen Mini-ITX computer comes in a stylish aluminum + steel chassis that can pack up to 32 GB of DDR4 memory, an M.2-2280 SSD, and a 2.5-inch HDD or SSD. As for connectivity, the system has Wi-Fi or optional 4G support, two GbE ports, four DisplayPort 1.3 outputs, six USB connectors (four USB 3.1 and two USB 2.0), two RS-232 ports, and audio connectors. One of the things that differentiate the MC510-40 from competing Ryzen Embedded is support for an mPCIe socket for expansion.

The MC510-40 machine is certified to work in temperature ranges between 0°C and 50°C, which is wide enough for home/office, kiosks, commercial, and some industrial applications. Meanwhile, the APU requires active cooling, so potentially hot environments will not be suitable for this PC.

SimplyNUC’s Sequoia UCFF PCs with AMD’s quad-core Ryzen Embedded APUs come in small rugged NUC-like chassis that can withstand up to 95% of relative humidity as well as temperatures as high as 60°C. The manufacturer says that the systems can be used for a wide range of applications, including edge data analytics, electronic kiosks, and digital signage.

Unlike its rivals, SimplyNUC offers pre-configured Sequoia UCFF systems. The cheaper one is the Sequoia v6 equipped with AMD’s quad-core Ryzen V1605B processor, 4 GB of memory, and a 128 GB SSD. The more advanced one is the Sequoia v8 is based on AMD’s quad-core Ryzen V1807B processor, 4 GB of DDR4 RAM, and 128 GB SSD. Meanwhile, SimplyNUC can further tailor its PCs for needs of a particular customer.

When shipped in default configurations, SimplyNUC’s Sequoia v6 is priced at £445, whereas the Sequoia v8 costs £560.