According to a new financial presentation from Nidec, a Japanese motor manufacturer who is responsible for around 85% of all HDD spindle motors, the company believes that shipments of hard drives for PCs will drop significantly this year. Citing numerous ongoing trends, the motor maker is preparing for HDD motor sales to drop by around 50% year-over-year for 2019. Meanwhile the company also expects sales of other types of HDDs to slow, but not as drastically. In fact, unit shipments of hard drives for datacenters are projected to increase a bit.

According to Nidec's data, unit sales of hard drives declined by around 43% from 2010 to 2018, going from around 650 million units in 2010 to 375 million units in 2018. And it looks like sales will continue to drop in the coming years. Recently Nidec revised its HDD shipment forecast downwards from 356 million drives to 309 million drives in 2019, which will further drop to 290 million units in 2020. The recent drops in HDD shipments have already forced Nidec to optimize its HDD motor production capacities and repurpose some capacity to other types of products. 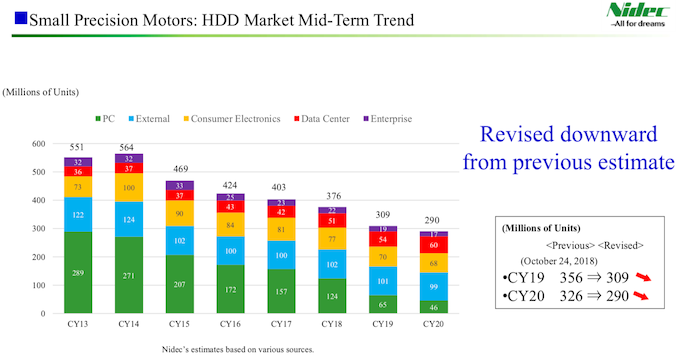 Shipments of PC HDDs have been hit the hardest among all types of HDDs due to a combination of general market weaknesses and the transition of notebooks to SSDs. According to Nidec, shipments of PC HDDs decreased gradually from 289 million drives in 2013 to 124 million devices in 2018. However, this year sales of hard drives for PCs will drop sharply, going from 124 million devices in 2018 to 65 million units in 2019, or by around 48%.

Meanwhile shipments of hard drives for broader consumer electronics devices is expected to decrease from 77 million HDDs in 2018 to 70 million in 2019. This is likely being driven by lower sales of current-generation consoles, surveillance systems, and other devices.

There is a bright spot in the HDD market however: external HDDs as well as nearline hard drives for datacenters are both looking strong. Shipments of the former will stay flat at around 100 million units, whereas sales of the datacenter drives are expected to increase to 54 million units, according to Nidec. Conversely, sales of enterprise-class drives – which Nidec counts separately from datacenter drives – are expected to decline a bit as mission-critical applications migrate to SSDs.

Amongst all of these shifts in HDD sales volumes, it is noteworthy that the leading hard drive makers have indicated that while unit sales of nearline and surveillance HDDs may stay more or less flat (or even drop), their capacities and ASPs are getting higher. 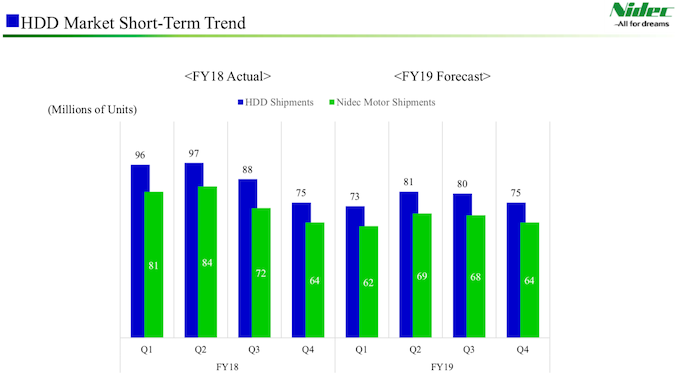 Nidec controls the lion’s share of the market for HDD spindle motors, so its projections are rather valuable and definitely worth checking out. Especially as the company expects to maintain its high market share throughout this calendar year.