MediaTek Launches Helio A Series SoCs, Starting With Helio A22 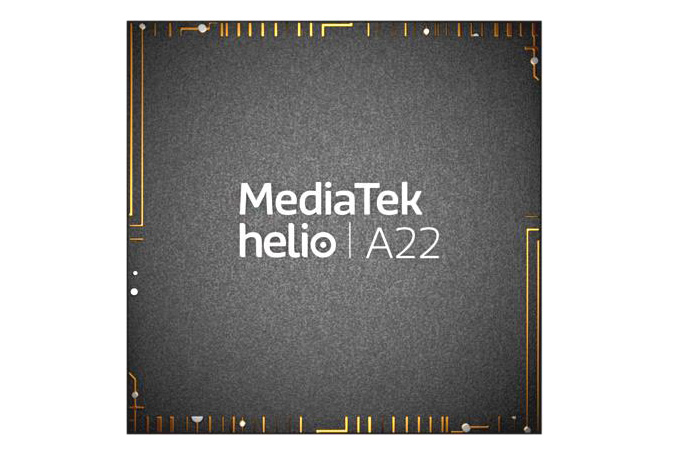 Following the success of their Helio P and X series SoCs, MediaTek this morning is announcing a third SoC family to complement the existing pats: the Helio A series. Aimed at what MediaTek is calling the “mid-market”, the new “Advanced” series of SoCs is meant to address phones in the $100+ range, which would put it in competition with the likes of Qualcomm’s Snapdragon 400 series. Kicking off the Helio A series family in turn is the A22, essentially MediaTek’s cheaper downmarket counterpart to the previously announced P22.

MediaTek is of course no stranger to the entry-level market, the “mid-market”, or whatever else it may be called. While flagship phones and their equally flagship SoCs get most of the attention, it’s the entry-level market where the volume play is. And this goes for both western markets where smartphones are already established, as well as emerging markets where smartphone penetration is still growing. So it’s a market that MediaTek is keen to continue addressing, and to continue to fend off other competitors.

Today the company is just announcing the first SoC for the A series family, though as the A22 is a relatively straightforward entry-level SoC, I wouldn’t be too surprised if this part is towards the low-end of the product stack going forward. Officially in their larger product stacks and promotional materials, MediaTek is lumping the A series more alongside parts such as the MT6750 – an octa-core Cortex-A53 based part – whereas the A22 is a simpler quad-core A53 design. So in practice, the Helio A22 is more a successor towards the MT6738/MT6739, which were also quad-core designs. Though lines of succession aside, it’s clear that the ultimate goal here for the company is to phase out the high-level use of MTxxxx product numbers, which would be a welcome development as the X/P/A series messaging is a lot clearer about which market and performance segments an SoC is meant to fit in. 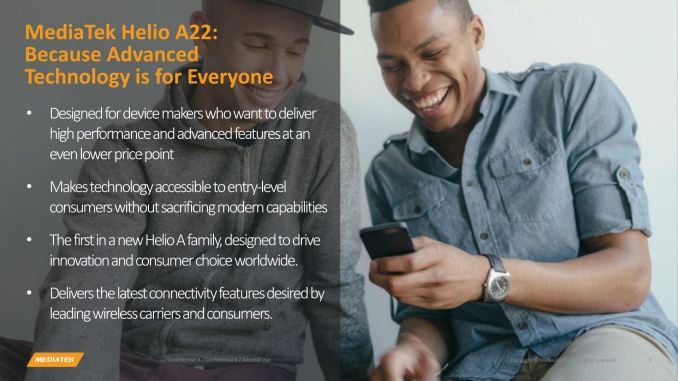 In any case, let’s dive in to the Helio A22 itself. As previously mentioned, the A22 is built around a quad-core Cortex-A53 CPU cluster, which in this latest SoC will be clocking at up to 2GHz. Those CPU cores will in turn be paired up with an Imagination PowerVR GE8320 GPU, a single cluster GPU design released by Imagination last year. Overall this is relatively similar to the MT6739, following the same CPU and GPU architectures but with more powerful configurations chosen. However beyond that, the A22 immediately starts setting itself apart from the MT6739 thanks to its manufacturing process: it is the first entry-level MediaTek SoC to be produced on a sub-28nm process, with MediaTek specifically using TSMC’s 12nm process, the same used for the Helio P60.

MediaTek isn’t especially promoting the use of TSMC’s 12nm process, but the choice is none the less an important one. The most immediate benefit to users are the power savings MediaTek will see from the newer process; the company expects to do very well here thanks to the process and what they feel is a market-leading power & task management technology in the form of the latest CorePilot. As for OEMs, the benefit of the smaller 12nm is just that: it’s smaller. And since die size is king in the entry-level market, it means that the A22 stands to be a very competitive chip indeed, maximizing the number of chips produced per wafer and keeping SoC costs to a minimum.

Overall however, MediaTek’s strongest focus on the SoC isn’t on its core configuration of performance; as should be obvious from the core specifications of the phone, the SoC isn’t going to burn up the charts in terms of performance. Rather the company is trying to differentiate itself and the A22 from a feature standpoint, particularly in the areas of camera support and LTE performance.

On the camera side of matters, the entry-level SoC will sport two ISPs, allowing the phone to drive two cameras simultaneously. By the numbers, this will allow for a 13MP + 8MP camera configuration, or a single camera can go up to 21 MP. Arguably this choice is more focused on still photography than videos, as the dual camera setup favors the former – it’s difficult to argue with the popularity of artificial bokeh in consumer photos. The SoC’s fairly modest video encode block, by comparison, tops out at just 1080p30, so it affords relatively basic video recording. 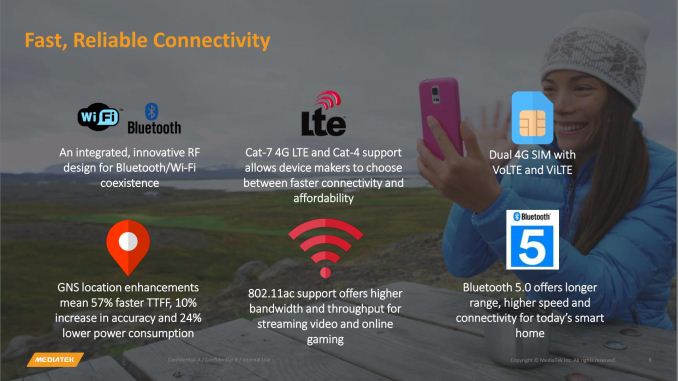 As for cellular networking performance, the A22 will support LTE Category 7 downloads and Category 13 uploads, allowing for download rates upwards of 300Mbps and upload rates of 150Mbps. And as one might expect for an entry-level SoC, the A22 is a dual-SIM product, supporting VoLTE on both networks. This has been a recurring feature push by MediaTek as they believe the second SIM should offer feature parity with the primary SIM, especially as some of the expanding markets they’re now going after were built for LTE from the start, meaning that those markets have limited 3G/2G connectivity.

And while it doesn’t get a separate product number, MediaTek will be offering a second, cheaper version of the A22 SoC with more limited LTE Category 4 support. As one might expect, the Cat 4 model is for cost reasons; besides being a cheaper chip, Cat 4 doesn’t require carrier aggregation like Cat 7 does, allowing for simpler radios that don’t need to be able to tune and bond multiple bands at once, ultimately resulting in cheaper phones.

Finally, expect to see MediaTek and its OEM customers throwing AI around a lot, as AI functionality continues to be a buzzword in the market. In the case of the A22 the SoC does not have any dedicated neural networking hardware – there isn’t an NPU here like in the P60 – so those are executed on the GPU and the CPU as necessary. MediaTek is however providing the necessary drivers to and infrastructure to support Android’s NNAPI, so programs built against the API will be able to use the GPU (relatively) transparently, and this is where MediaTek’s claims for AI support come from.

Wrapping things up, the Helio A22 SoC is already shipping today; and indeed phones based on the SoC are already shipping as well. Xiaomi’s Redmi 6A is already out in China, with additional phones to follow. The 6A is, in turn, running for around $110 USD, which should give you a solid idea of the market segment MediaTek is chasing with the A22.