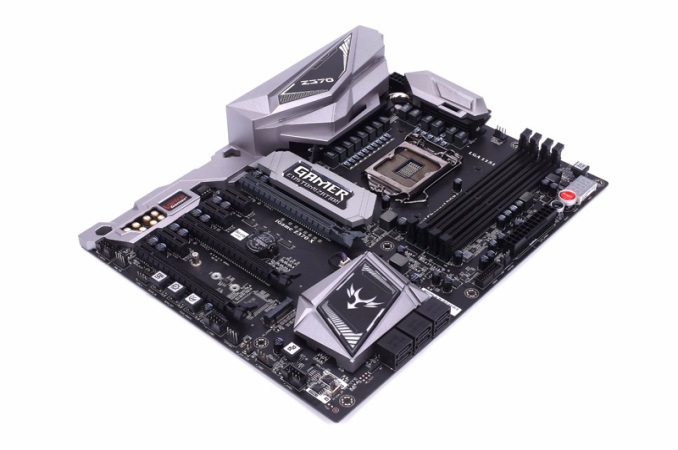 Colorful, not a widely known brand in the States, has released a motherboard for the Z370 platform with an exotic name: the iGame Z370 Vulcan X V20. The board attempts to focus on gamers with a beefy power delivery, a Killer E2500 gigabit ethernet controller, dual M.2 slots, a dual BIOS and LED lighting, as well as integrated power and reset buttons, a one-touch overclock button, and a three digit debug LED for debugging and monitoring. Carried over from their Z270 boards are Fintek F75503 and F75501 chips for low-latency USB gaming peripherals.

The board itself is black, with most of the connectors and slots also being black. One of the PCIe slots is gray, and the IO shroud and heatsinks give the board silver highlights. The dual VRM heatsinks are connected via heatpipe, sharing the heat load between them as seen on some high-end boards. Just below the socket is a metal heatsink for the top M.2 slot, which also comes with a silver heatsink. The back panel IO and audio sections have a silver shroud covering those parts, as well as incorporating RGB LEDs within them. The chipset heatsink is fairly large, has the Colorful iGame design on it, and is also hiding RGB LEDs underneath. 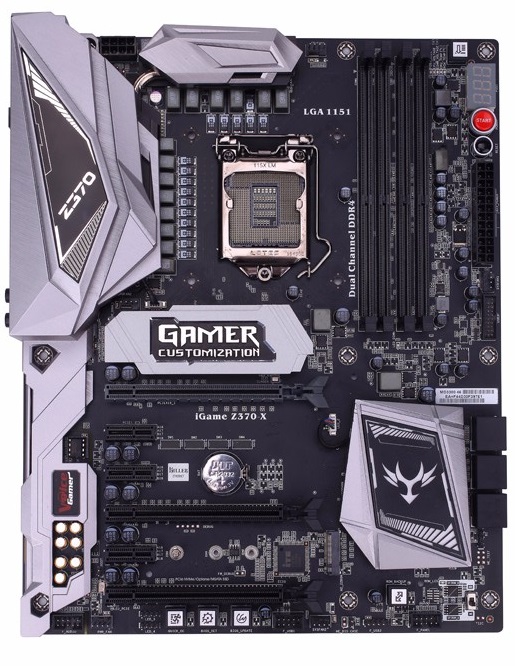 The Vulcan X’s four non-reinforced memory slots can hold up to 4 modules supporting up to 64GB of RAM. The supported memory speed on this board is at DDR4-3200, which is lower compared to the boards from the big four manufacturers. For PCIe, the top two slots are powered by the processor in an x16 and x8/x8 configuration, while the bottom slot is an x4 from the chipset. There are also three PCIe x1 slots from the chipset. This

Maintaining the Z370 standard, the Vulcan X has a total of six SATA ports. While there is no direct mention of RAID on the specifications page, we would be surprised if it did not support the basic RAID 0, 1, 5, and 10. The board comes with two M.2 slots, with the top slot above the main PCIe slot (and below the heatsink) supporting a PCIe module only, up to 80mm module. The bottom slot, found between the two bottom full-length PCIe slots, can also support up to an 80mm module but can do both PCIe and SATA drives.

By visual inspection, there appears to be a total of four 4-pin fan headers on the board. No information if they are PWM only or a hybrid DC/PWM setup. Audio duties are handled by the previous generation’s Realtek ALC1150 codec, although with the shroud in place it is unclear if much extra work has gone into PCB separation or EMI shielding. The Vulcan X is able to drive up to 600Ω headphones with its op-amps and also uses Nichicon audio capacitors. Networking functions are handled by the Rivet Networks Killer E2500 Gigabit controller. 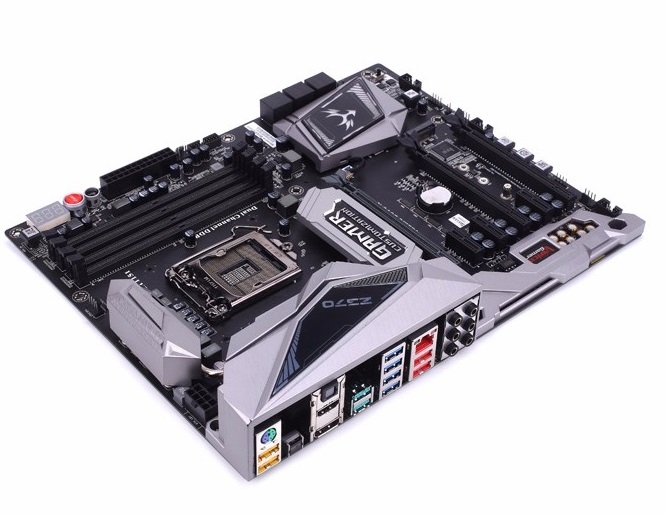 On the back panel IO, the yellow ports are USB2.0 and two red is the low-latency gaming ports, The two light blue color ports are USB 3.1 10 Gbps, while there is a stack of four USB 3.0 ports. Rounding out the back panel IO there is a CMOS reset button, HDMI and DisplayPort outputs for integrated video, and a gold-plated 6-jack audio stack plus a SPDIF out.

The Colorful iGame Z370 Vulcan X V20 is available now in South Korea, but no mention of when or if it will make it to other markets.