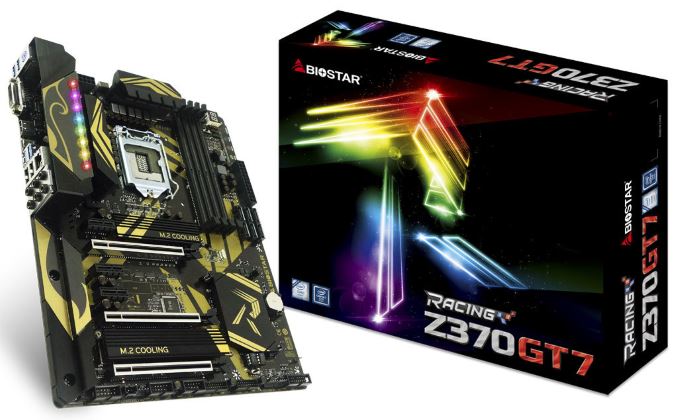 Not willing to be left behind at the starting line, Biostar has announced its entries into the rapidly growing Z370 motherboard market. At the time of publication, Biostar is bringing two boards to the table from their Racing line with the Z370GT7 and Z370GT6. The GT7 is the company's flagship board and, accordingly, will be the more expensive of the two. While both are full-featured motherboards, the GT7 offers an additional M.2 heatsink over the GT6 (bringing the total to two), three full-length PCIe slot reinforced compared to the GT6's two, as well as additional shrouding covering the audio section of the board on the GT7. Outside of that, differences between the boards will be difficult to spot.

The Biostar Racing line is in its third generation Racing series aesthetic which features a gold and black color theme. All heatsinks on the board are black and adorned with yellow accents while the PCB itself is black. The “R” (Racing) symbol is found prominently on the chipset heatsink. Other gold accents are found scattered around the board.

Both boards use an 11-phase VRM to drive the Coffee Lake-based CPUs. Both boards also feature three full-length PCIe x16 slots and three x1 slots. In the top right corner, both boards have a debug LED, BIOS switch, and a panel with four buttons on it for power/reset functionality, as well as Turbo and Eco mode buttons. RGB LEDs can be found on both boards with the GT7’s located on the back panel IO shroud, while the GT6’s are found on to the left of the audio section. The integrated LEDs and external LEDs (via two headers) can be controlled with Biostar’s Vivid LED DJ utility. It features 10 different flashing modes along with color, speed, and brightness controls allowing control over each lighting zone independently. 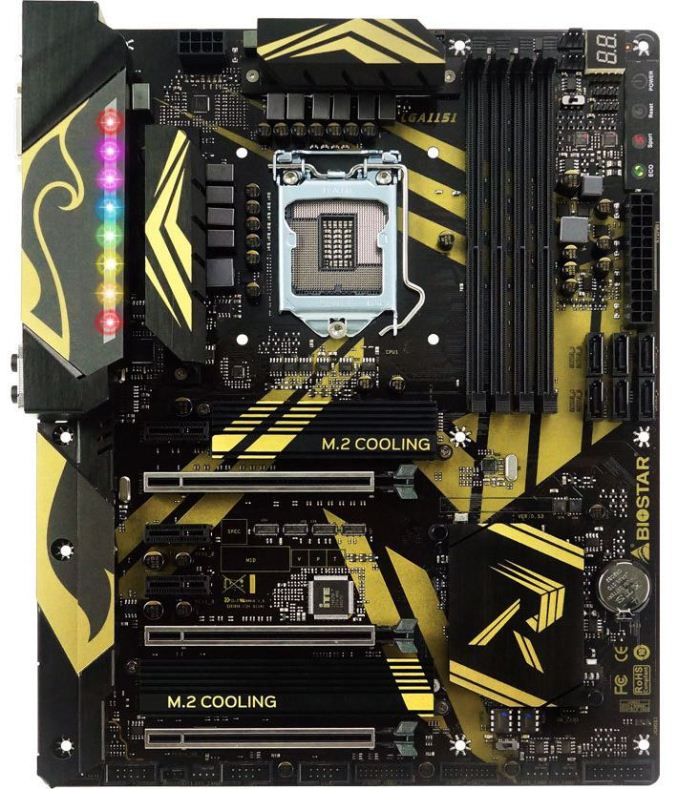 Neither board uses reinforced DIMM slots, however two full-length PCIe slots on the GT6 and all three slots on the GT7 get protection. The slots break down to x8/x8/x4 and both boards support 3-way AMD Crossfire, though it should be noted that there isn’t a mention of SLI support in any form on the specifications page. The last full-length slot at x4 shares bandwidth with the second M.2 slot. The boards four DIMM slots support up to 64GB of RAM with speeds supported to DDR4 3866(OC). While still fast, this is the second lowest speed we have seen supported across all Z370 boards covered. Only the ECS board supported slower maximum speeds (DDR4 3200).

For mass storage purposes, both boards use the full allotment of six chipset managed SATA ports. However instead of locating these in their typical position to the right of the PCH heatsink on the bottom half of the board, Biostar as placed them towards the middle of the board oriented them vertically. The first M.2 slot is above the top full-length PCIe slot and supports up to 80mm sticks, while the second slot can be found between the bottom two PCIe slots and supports up to 110mm devices. The GT7 offers heatsinks on both M.2 slots, while the GT6 only cools the bottom slot. 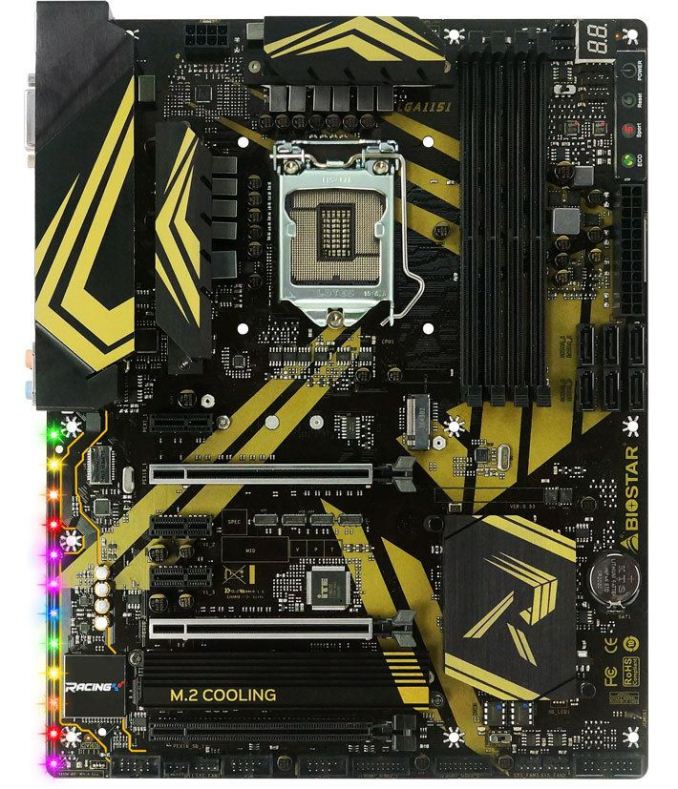 As for cooling, the board gives users a total of five four-pin fan headers to use scattered in various locations around the board. These can be controlled via voltage or PWM through the BIOS or through the Windows-based application. Audio functionality is handled by the Realtek ALC1220 codec, uses EMI shielding, what looks to be Chemicon audio caps, as well as separation from the rest of the board. Network capabilities on both boards and handled by the Intel I219-V Gigabit Ethernet which supports LAN surge protection. 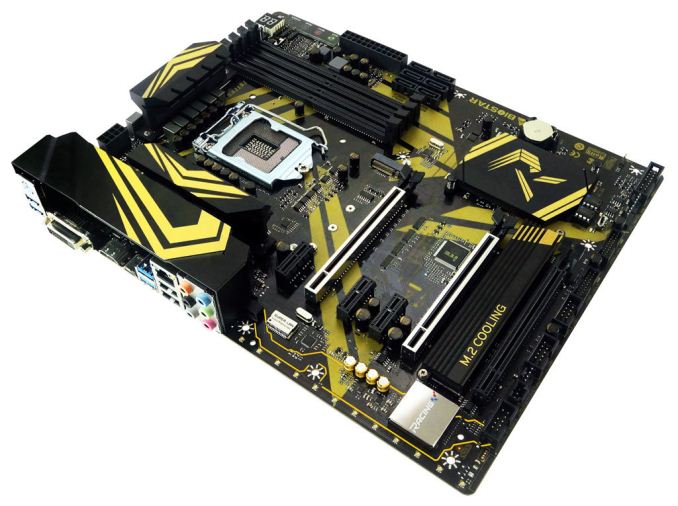 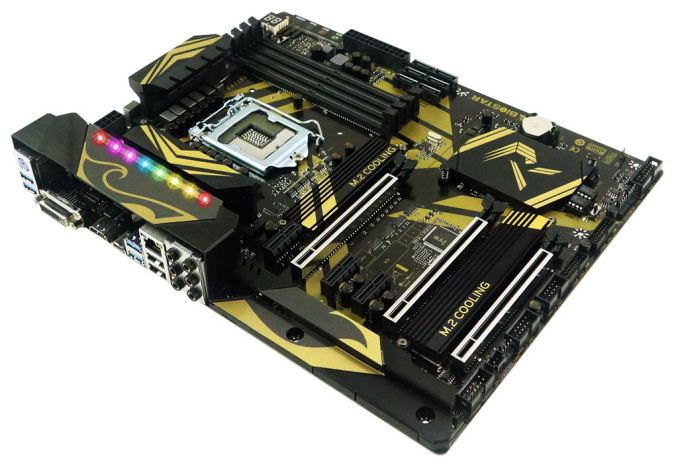 Both the GT6 and GT7 have the same number and types of USB ports. There are two USB 3.1 (5 Gbps) Type-A ports and one Type-C, and an additional two USB 2.0 ports on the back panel IO. Internally there is an additional USB 3.1 (5 Gbps) header and USB 2.0 header for front panel connections. The back panel IO also contains a PS/2 port, DVI-D, and HDMI for video outputs, as well as a six plug audio stack. The GT7 chooses to use all black colored plugs versus the GT6 using the color-coded version most are familiar with.