As we approach August the technical conference season for graphics is finally reaching its apex. NVIDIA and AMD held their events in May and June respectively, and this week the two of them along with the other major players in the GPU space are coming together for the graphics industry’s marquee event: SIGGRAPH 2012.

Outside of individual vendor events, SIGGRAPH is typically the major venue for new technology and standards announcements. And though it isn’t really a gaming conference – the show is about professional usage in both senses of the word – a number of those announcements do end up being gaming related. Overall we’ll see a number of announcements this week, and kicking things off will be the Khronos Group.

The Khronos Group is the industry consortium responsible for OpenGL, OpenCL, WebGL, and other open graphics/multimedia standards and APIs. Khronos membership in turn is a who’s who of technology, and includes virtually every major GPU vendor, both desktop and mobile. Like other industry consortiums the group’s president is elected from a member company, with NVIDIA’s Neil Trevett currently holding the Khronos presidency.

Khronos’s first SIGGRAPH 2012 announcement – and certainly the biggest – is that OpenGL ES 3.0 has finally been ratified and the specification released. As the primary graphics API for most mobile/embedded devices, including both iOS and Android, Khronos’s work on OpenGL ES is in turn the primary conduit for mobile graphics technology development. Khronos and its members have been working on OpenGL ES 3.0 (codename: Halti) for some time now, and while the nitty-gritty details of the specification have been finally been hammered out, the first OpenGL 3.0 ES hardware has long since taped-out and is near release. 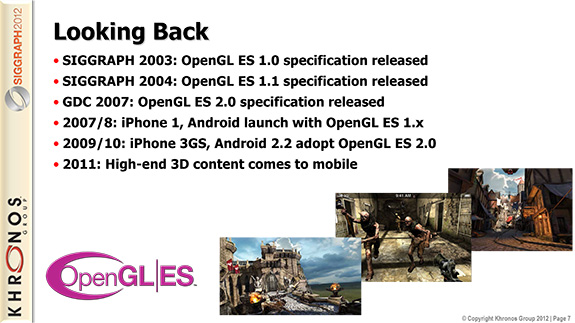 Unlike the transition from OpenGL ES 1.x to 2.0 (which saw hardware move from fixed function to programmable hardware), OpenGL ES 3.0 is going to be fully backwards compatible with OpenGL ES 2.0, which will make this a much more straightforward iteration for developers, and with any luck we will see a much faster turnaround time on new software taking advantage of the additional functionality. Alongside an easier iteration of the API for developers, hardware manufacturers are far more in sync with Khronos this time around. So unlike OpenGL ES 2.0, which saw the first mass-market hardware nearly 2 years later, OpenGL ES 3.0 hardware will be ready by 2013. Desktop support for OpenGL ES 3.0 is also much farther along, and while we’ll get to the desktop side of things in-depth when we talk about OpenGL 4.3, it’s worth noting at this point that OpenGL 4.3 will offer full OpenGL ES 3.0 compatibility, allowing developers to start targeting both platforms at the same time.

On that note, OpenGL ES 3.0 will mark an interesting point for the graphics industry. Thanks to its use both in gaming and in professional applications, desktop OpenGL has to serve both groups, a position that sometimes leaves it caught in the middle and generating some controversy in the process. The lack of complete modernization for OpenGL 3.0 ruffled some game developers’ feathers, and while the situation has improved immensely since then, the issue never completely goes away.

OpenGL ES on the other hand is primarily geared towards consumer devices and has little legacy functionality to speak of, which makes it easier to implement but also allows OpenGL ES to be relatively more cutting edge. All things considered, for game developers OpenGL ES 3.0 is going to very nearly be the OpenGL 3.0 they didn’t get in 2008, although geometry shaders will be notably absent. Consequently, while OpenGL 4.x (or even 3.3) is still more advanced than OpenGL ES 3.0, it’s not out of the question that we’ll see a bigger share of OpenGL desktop game development use OpenGL ES as opposed to desktop OpenGL.