During Microsoft's Windows 8 Consumer Preview Event at MWC today, Microsoft demonstrated some of the new features in the CP release out today. While the Metro UI obviously lends itself to use on a touch enabled tablet, Microsoft was clear to point out that it works just as well with a keyboard and mouse. Bezel gestures and regular multitouch gestures on the screen make sense on a tablet, but how do you get access to the multitasking UI, charms bar or other Windows 8 features if you have a traditional (non-touch) notebook? Through hot corners of course.

The traditional Start Menu is gone and has been replaced by a hot corner. Move your mouse to the lower left screen corner and you'll get a tiny popup that you can use to launch the Start Screen. The lower right corner lets you zoom in/out of the start screen, while the upper left corner lets you quickly switch between apps (just click to switch to your last app, or click and drag to reveal the task switcher). Finally, the upper right corner is used to reveal the Windows 8 charms bar. 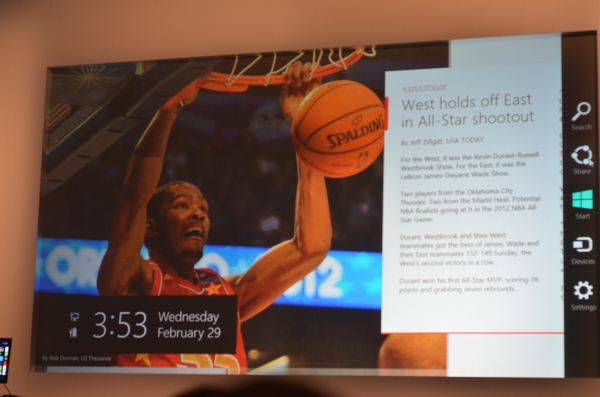