One of the ways that enthusiasts tinker with their processors is through overclocking: the attempt to get more performance by changing frequencies and voltages, up to the limits of the system. Another way is through undervolting – removing voltage from the processor to help lower temperatures and offer higher thermal headroom (or lower power consumption). It all depends on the silicon, and if it can support it: AMD (and Intel) have to set hard limits for production to enable sufficient yield and costs, but users on certain products can always poke the hardware to try and get something more. With this in mind, AMD is improving its range of overclocking tools to allow for adaptive undervolting of Ryzen 5000 processors.

For any given microprocessor circuit, it requires a minimum voltage to run at a given frequency, before not having enough to complete the process. Most modern processors have a good amount of built-in headroom such that external factors cannot come into play, such as voltage droop based on instantaneous power draw, or as the processor ages, no extra voltage is required. Obviously, a lower voltage means lower power consumption, or more opportunity for higher boost, and so vendors use a variety of techniques to get their processor cores to run as close to the absolute minimum as possible. Despite this, there is always more room to go – vendors have to define a cut-off point between a realistic voltage tracking technique and something that can be scaled for a million processors. Individual users however can skirt those lines for their specific hardware a lot closer than a generic algorithm can. 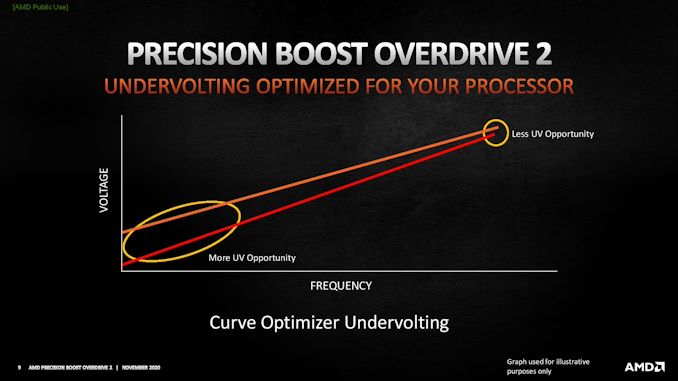 AMD’s new Curve Optimization tool, to come with AGESA 1180 on 400-series and 500-series motherboard BIOS updates, is designed for this single-user voltage tracking scenario. The goal of the Curve Optimization tool is to opportunistically reduce voltage where possible during low load and high load scenarios, but rather than simply apply a fixed voltage offset across the whole range, it will use other internal sensors (such as workload, temperature, socket limits) to adapt the voltage as required. With AMD’s tool, it should do this on the order of one millisecond, i.e. 1000 times a second. 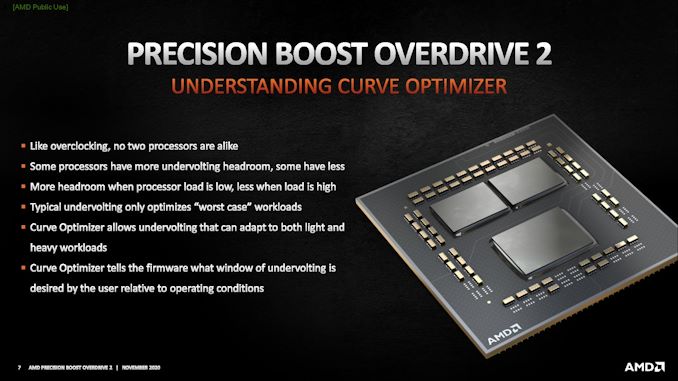 The Curve Optimization tool will be part of AMD’s Precision Boost Overdrive toolkit, meaning that using it will invalidate the warranty on the hardware, however AMD knows that a number of its user base loves to overclock or undervolt to get the best out of the hardware. The company states that this adaptive methodology will allow for performance gains in both single-thread and multi-thread workloads, as opposed to a standard voltage offset, which they say only really helps with multi-thread examples. 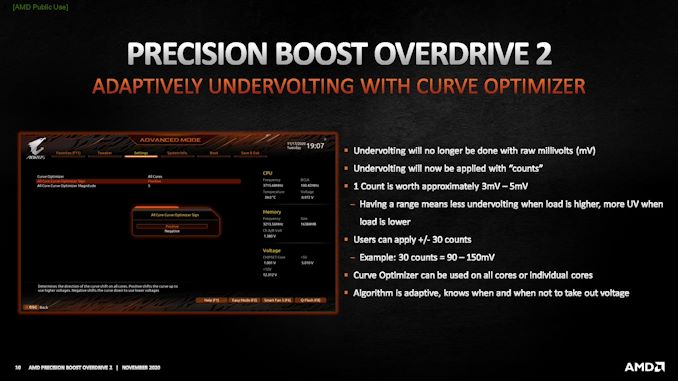 The settings will allow users to test how much adaptive undervolting will be allowed. AMD has tuned the feature such that a user can select how many ‘counts’ or ‘stages’ they want to undervolt by, with each count equating to 3-5 millivolts, up to a maximum of 30 stages. This means that a 10-stage selection will enable a 30-50 millivolt undervolt, depending on the workload and depending on where the control circuitry deems it appropriate. 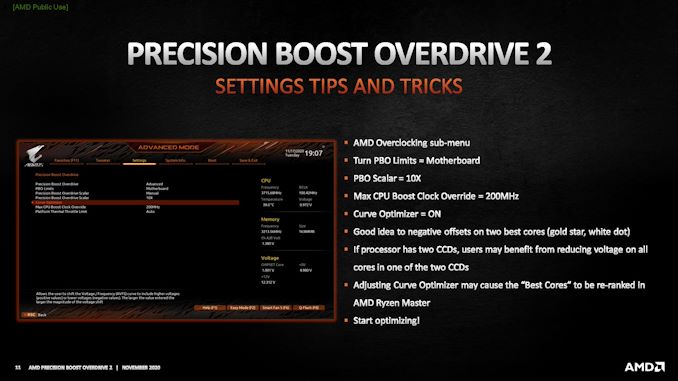 Performance numbers from AMD would suggest that this technique, compared to a simple fixed undervolt and core frequency increase, can lead to a +2% single thread performance improvement, or up to a +10% multi-thread performance improvement for the Ryzen 9 5900X. AMD stated to us that this technique works best with multiple CCDs, and fewer cores per CCD, so the Ryzen 9 5900X is going to be the best goal for the technology. AMD has also stated that this is going to be applied to all new processors going forward, however it will not be back-ported to Ryzen 3000 as it requires some engineering optimizations in Ryzen 5000 that are non-transferrable.

Users will be able to enable Curve Optimizer through the BIOS initially, with plans to introduce it to AMD’s Ryzen Master software toolkit for Windows sometimes in the new year. Users should note that the best CPU designations inside Ryzen Master may change with these settings, given that the software will see different voltage/frequency curves than at stock. A few motherboards have the feature already present in AGESA 1100 today, however the official rollout will occur with AGESA 1180 firmware updates, initially set to hit the support pages for each motherboard in early December.