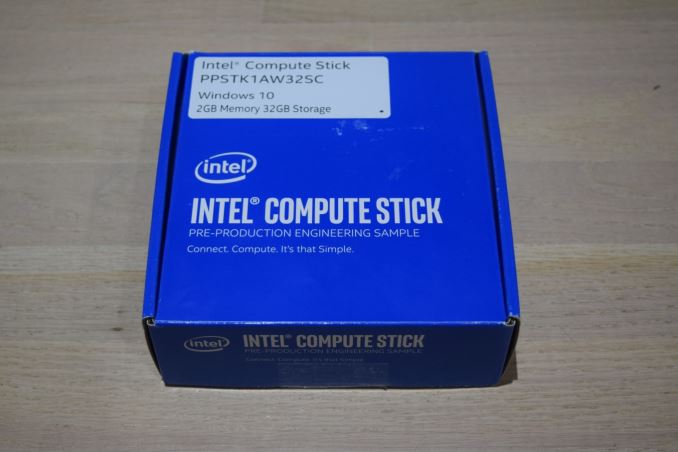 The success of UCFF PCs have made vendors realize that small and power-efficient computing platforms are here to stay. ARM SoC manufacturers, finding that the tablet market had reached saturation, kick-started a new product category in the form of 'HDMI sticks'. As a computing platform, they were smaller than the ultra-compact form factor PCs - just looking like an oversized USB key. Intel joined the game in CES 2015 with the Bay Trail Compute Stick. The first iteration was, to put it kindly, a bit underwhelming. However, Intel showed its commitment to the form factor by announcing three new Compute Stick models at CES 2016. They included one Cherry Trail (Atom) and two Core M models.

The Intel Compute Stick we are reviewing today is the Cherry Trail model (PPSTK1AW32SC) that comes with Windows 10 Home (32-bit) pre-installed, making it ready to roll right out of the box. The specifications of our Intel PPSTK1AW32SC review configuration are summarized in the table below.

The Atom x5-Z8300 belongs to the Cherry Trail family - the set of SoCs with Airmont Atom cores that target the tablet market. These SoCs are very similar to the Bay Trail SoCs, except that we have a process shrink from 22nm to 14nm and the integrated GPU is a bit more powerful. The clock speeds are also a bit higher compared to the Bay Trail SoCs while maintaining a similar power envelop.

The Intel PPSTK1AW32SC kit comes with a pre-installed OS, but no extra software is provided. Drivers and recovery BIOS (if needed) are available for download on Intel's site. In addition to the main unit, the other components of the package include a 15 W (5V @ 3A) adapter with a micro-USB power delivery port. The cable is more than 3ft in length, which solves one of the complaints about the Bay Trail Compute Stick and the short power cord. We also get a HDMI extender cable to help use the Compute Stick in recessed or otherwise inaccessible HDMI ports. 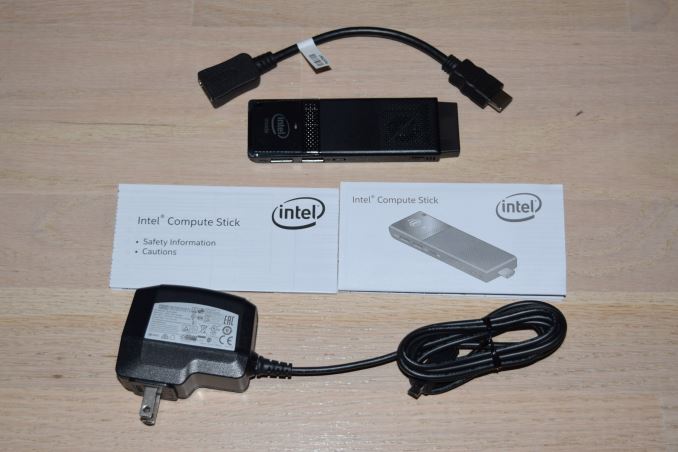 We had a very difficult experience managing our previous mini-PC reviews with just 32 GB of eMMC storage. Fearing a similar situation, we decided to reuse the Patriot EP series 64 GB microSDXC card that we had used in the Bay Trail Compute Stick review.

In the table below, we have an overview of the various systems that we are comparing the Intel PPSTK1AW32SC against. Note that they may not belong to the same market segment. The relevant configuration details of the machines are provided so that readers have an understanding of why some benchmark numbers are skewed for or against the Intel PPSTK1AW32SC when we come to those sections.