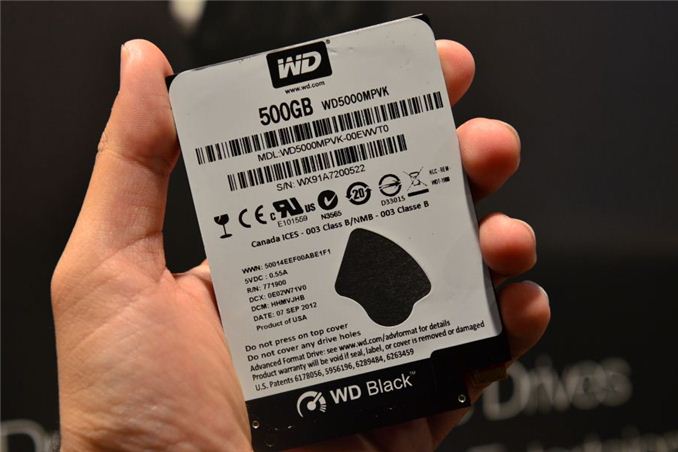 Yesterday Western Digital and SanDisk announced their collaboration for hybrid hard drives (or SSHDs as they are now called). The idea behind the move is that SanDisk will supply Western Digital with iSSDs (I’ll explain what these are in a bit), which WD will then integrate with their hard drives to act as a read/write cache. The new 2.5" WD Black that was first showcased at IDF last year will be the first fruit of the collaboration, and it will also be WD’s first SSHD.

WD’s approach with SSHDs is slightly different from Seagate’s. Seagate simply put a NAND package on the PCB and used their own controller manage it. SanDisk’s iSSD, on the other hand, is a standalone SSD with a SATA 6Gbps interface in BGA-156 form factor (sometimes called µSSD). Both implementations obviously have their pros and cons: Seagate has total control over the NAND (garbage collection, etc.) but it also means the NAND performance is up to Seagate’s engineers, whereas WD can rely on SanDisk’s expertise on the NAND frontier and concentrate on caching and hard drive technologies.

Now, before we get too excited, putting an iSSD inside a hard drive won’t magically solve the biggest problems that SSHDs have. The first generation WD Black will only have 8GB-32GB of NAND, which is better (or the same) than Seagate’s SSHD (or Momentus XT as it was called previously) but it’s still not enough to provide performance that is even close to the SSD-only experience. SanDisk promises pretty impressive numbers for the iSSD (450/350MBps sequential read/write, 9K/1K IOPS random read/write), but those are for the largest 128GB SKU. Remember that one of the key elements of SSD performance is high parallelism: The more NAND you have, the better the performance is because you can access multiple dies simultaneously. As the Black SSHD will only have up to 32GB of NAND, it won’t be able to achieve a similar level of performance as the 4x larger 128GB model.

With increasing NAND densities the performance difference between capacities has become an even bigger issue because performance decreases with every process node, yet capacity per die goes up. This is a double-whammy that results in lower parallelism (and hence performance) at the smallest capacities. With SLC NAND you could somewhat dodge the performance issue since SLC NAND is faster to begin with, but unfortunately the iSSD is MLC based (which shouldn’t surprise anyone given the pricing of SLC NAND).

When you combine the very limited amount of NAND with a low-power integrated controller, it’s simply impossible to get performance that’s anywhere close to a decent standalone SSD. Of course there’s the caching side too because only a small portion of your data can be stored in the NAND, so in most cases you will still be limited by the spinning platters. With 32GB it should finally be possible to cache Windows in full, although the hurdle of hardware-level caching is that you have no say in what goes where.

What’s really special about this announcement is the timing as Seagate introduced their first consumer SSDs only a day earlier. I have a feeling that WD and SanDisk had not planned to go public with their partnership yet but Seagate’s announcement changed their plans. With WD’s biggest rival entering the SSD market, it’s clear that shareholders want to know WD’s strategy in order to maintain credit on the company.

Aside from keeping investors happy, there are also concrete reasons for the partnership. By far the most important one is the fact that SanDisk is a fab owner (a joint-operation with Toshiba where SanDisk gets 49% of the NAND output). Nowadays if you want to do something that requires NAND, there’s no other way to guarantee a steady NAND supply than to partner up with a NAND fabricator. There have already been several NAND shortages in the market (and it's only going to get tougher this year) and the brutal fact is that the ones without a fab or partnership are the last ones in the supply chain.

I’ve already heard from several fab-less SSD OEMs that they have not been able to keep up with demand because there’s not enough NAND in the market. For someone like WD a steady NAND supply is even more important because at least in the beginning the WD Black SSHD is aimed towards OEMs (there's a custom connector so it doesn’t work in regular systems without an adapter). If your production is dependent on the fluctuations of the NAND market, OEMs will likely not choose your product because they don’t want to take the risk of halting their own production due to the lack of drives. It’s not a coincidence that for example Apple sources their SSDs from Samsung, Toshiba, and SanDisk, which are all NAND fabricators.

If WD ever decides to re-enter the SSD market, the partnership will obviously be even more important. I wouldn’t be surprised if WD and SanDisk were actually working on an SSD together. SanDisk has controller IP thanks to the acquisition of Pliant in 2011, but that arm of SanDisk has mainly been focused on the enterprise segment. The consumer market has much lower profits and it’s usually not profitable to design a consumer-grade controller on your own, but with a partner like WD it can turn out to be a good investment as R&D costs can be shared and WD has an enormous distribution channel for providing the product to the market.

All in all, I have a feeling that the real fruits of this partnership won’t be seen today or tomorrow. The WD Black SSHD is definitely an interesting product and we will try to get one in for reviewing as soon as possible, but it's likely that you will still be better off with a small-ish SSD accompanied by a hard drive for storage. My gut is saying that this is more of a transitory product as WD gets ready to re-enter the SSD market. That doesn’t mean it’s the end of story for SSHDs, but this announcement should have happened two, preferably three, years ago.