One of the more curious acquisitions in the last couple of years has been that of Nuvia by Qualcomm. Nuvia was a Silicon Valley start-up founded by the key silicon and design engineers and architects behind both Apple’s and Google’s silicon for the past few years. Qualcomm CEO Cristiano Amon made it crystal clear when Nuvia was acquired that they were going after the high-performance ultraportable laptop market, with both Intel and Apple in the crosshairs.

Nuvia came out of stealth in November 2019, with the three main founders having spent almost a year building the company. Gerard Williams III, John Bruno, and Manu Gulati have collectively driven the silicon design of 20+ chips, have combined over 100 patent, and have been in leadership roles across Google, Apple, Arm, Broadcom, and AMD. Nuvia raised a lot of capital, $300M+ over two rounds of funding and angel investors, and the company hired a lot of impressive staff.

The goal of Nuvia was to build an Arm-based general purpose server chip that would rock the industry. Imagine something similar to what Graviton 2 and Ampere Altra are today, but with a custom microarchitecture on par (or better) with Apple’s current designs. When Nuvia was still on its own in start-up mode, some were heralding the team and the prospect, calling for the downfall of x86 with Nuvia’s approach. However, Qualcomm swept in and acquired the company in March 2021, and repurposed Nuvia’s efforts towards a laptop processor.

It’s been no secret that Qualcomm has been after the laptop and notebook market for some time. Multiple generations of ‘Windows on Snapdragon’ have come to market through Qualcomm’s partners, initially featuring smartphone-class silicon before becoming something more bespoke with the 8cx, 8cx Gen 2, and 7c/7 options in the past couple of years. It has taken several years for Qualcomm to get the silicon and the Windows ecosystem somewhere that makes sense for commercial and consumer use, and with the recent news that Windows 11 on these devices now enabling full x86-64 emulation support, the functional difference between a Qualcomm laptop and an x86 laptop is supposed to be near zero. Qualcomm would argue their proposition is better, allowing for 2 days of use on a single charge, holding charge for weeks, and mobile wireless connectivity with 4G/5G. I’ve tested one of the previous generation S855 Lenovo Yoga devices, and the battery life is insane – but I needed better were functional support (turns out I have an abnormal edge-case work flow…) and more performance. While Qualcomm has been working on the former since my last test, and Nuvia is set to bring the latter. 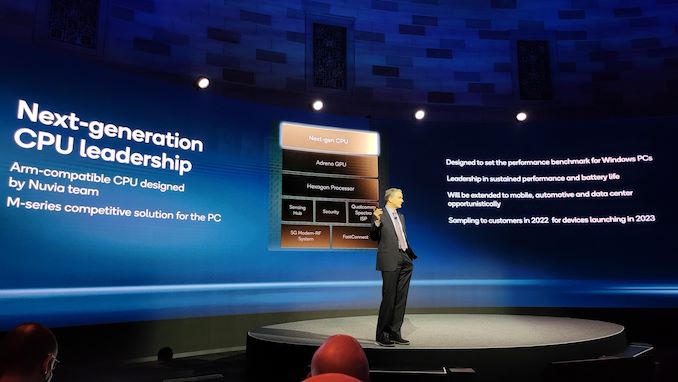 At Qualcomm’s Investor Day this week, the Qualcomm/Nuvia relationship was mentioned in an update. I had hoped that by the end of this year (and Qualcomm’s Tech Summit in only a couple of weeks) that we might be seeing something regarding details or performance, however Qualcomm is stating that its original schedule is still on track. As announced at the acquisition, the goal is to deliver test silicon into the hands of partners in the second half of 2022.

The goal here is to have laptop silicon that is competitive with Apple's M-series, but running Windows. This means blowing past Intel and AMD offerings, and coupled with the benefits of better battery life, sustained performance, and mobile connectivity. From the disclosures so far, it’s perhaps no surprise that the Nuvia CPUs will be paired with an Adreno GPU and a Hexagon DSP, although it will be interesting to see if the Nuvia CPU is a single big core paired with regular Arm efficient cores, or everything in the CPU side will be new from the Nuvia team.

I have no doubt that at Qualcomm’s Tech Summit in December 2022 we’ll get a deeper insight into the microarchitecture of the new core. Either that or Qualcomm might surprise us with a Hot Chips presentation in August. With regards to going beyond laptop chips, while Qualcomm is happy to state that Nuvia's designs will be 'extended to [other areas] opportunistically', it's clear that they're locking the crosshairs on the laptop market before even considering what else might be in the field of view.