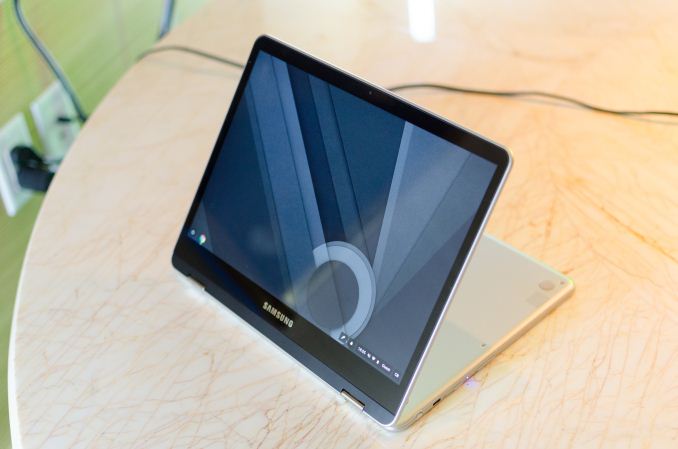 Today at Samsung’s CES 2017 press conference there were a number of announcements for their mobile PCs. At a high level, this includes the Notebook 9 refresh, a new Odyssey gaming laptop, and Chromebook Plus and Pro. 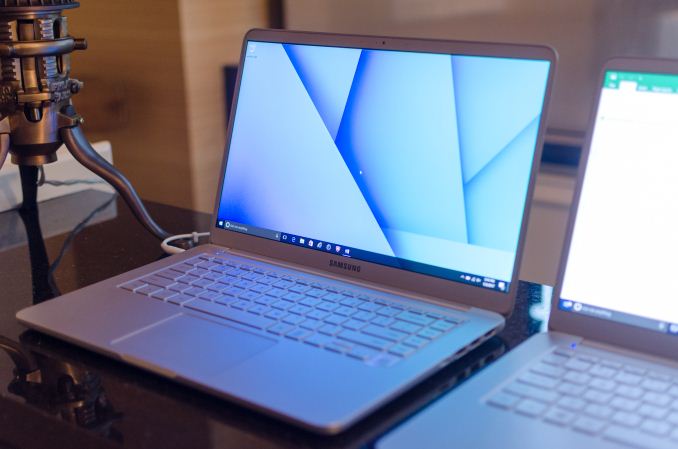 Starting with the Notebook 9, while this laptop already has existed in name, this represents an update to the latest Intel Kaby Lake processors and features like the thin bezel and fast charge carried forward as seen in the spec sheet below.

The laptop remains under 1.8 pounds in the 13" guise due to the use of a magnesium chassis which makes this laptop feel impossibly light. There’s nothing particularly flashy in terms of features here but this looks to be an excellently executed laptop as far as display with sRGB coverage, guaranteed dE2000 average under 2.5, up to 500 nits of brightness for outdoor use, and 1080p resolution to avoid many of the pitfalls that come from shipping high DPI displays with Windows. Both sizes ship with a fingerprint scanner that scans the full finger from FPC. 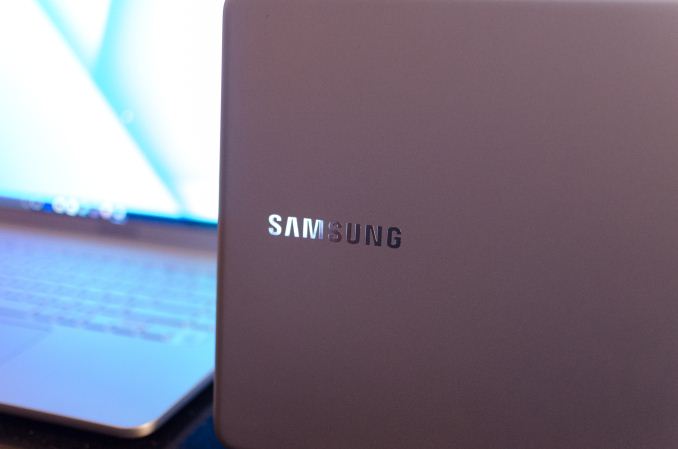 The 15 inch variant also offers some interesting upgrades, such as PCIe SSD and the option for a discrete GPU, namely the NVIDIA GeForce 940MX for those that want the ability to do more processing on the go and possibly some light gaming. 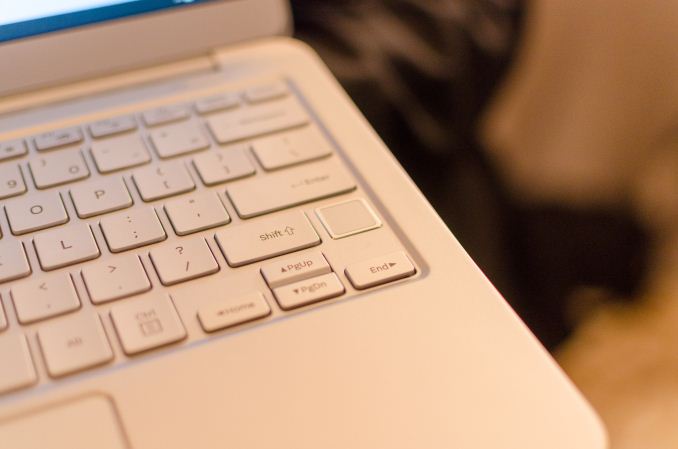 From some casual use here nothing really stands out about this laptop as immediately wrong. Good design is about taking away unnecessary things, and my first impression here is that Samsung has pulled it off. However, the trackpad is a standard diving board style clickpad so if you try to press down on the top side of the trackpad it won’t click as you might expect. In order to make these laptops incredibly light there is also very little modularity as we’ve come to expect from ultrabooks. 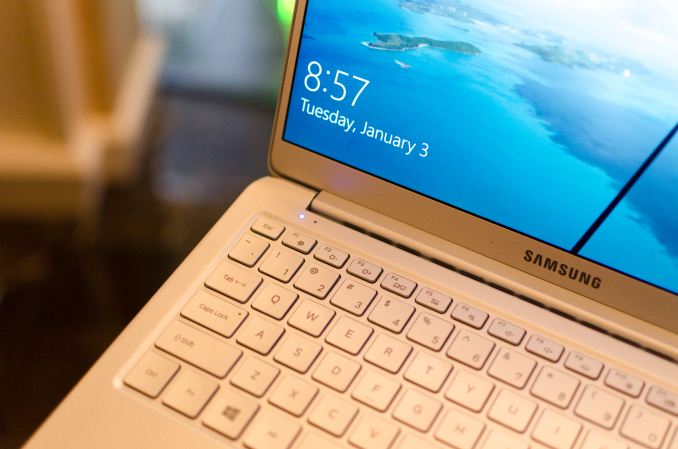 I also noticed that the chassis has quite a bit of flex to it. Pressing down at the top of the trackpad with the force normally used to press a trackpad resulted in the top of the laptop visibly bowing inwards, and with two fingers it was fairly easy to flex the display back and forth if you maximized leverage by applying it at the edges furthest from the hinge. I suspect it will take a full review to really judge whether Samsung has gone a bridge too far here in pursuit of cutting weight. 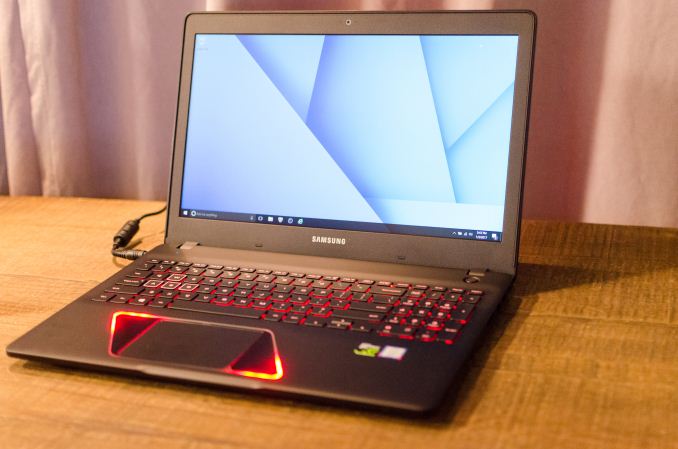 For the Notebook Odyssey 15, Samsung is making a return to the gaming laptop market with a 15.6” laptop outfitted with Intel i7 Kaby Lake, GTX1050, 16GB of RAM in SO-DIMMs, customizable backlit keys, and a full HD display with anti-glare coating as seen in the spec sheet below.

The emphasis on this laptop is easy repair and upgrade so there’s room for a 2.5” hard drive, SSD, SO-DIMMs, and plenty of ports. The laptop is fairly portly as well to allow for the cooling system which draws air from the bottom of the laptop and exhausts it from the hinge similar to the Razer Blade. This laptop ends up being quite large and portly though, which is a bit unfortunate as it seems to me that a lot of the growth in the gaming laptop market is the rise of all-in-one gaming laptops that can not only be a great laptop but a good gaming system like the Razer Blade. The rather ostentatious gamer aesthetics contribute to the feeling that this is designed to compete with Clevo/Sager desktop replacements which is arguably a fairly saturated market. 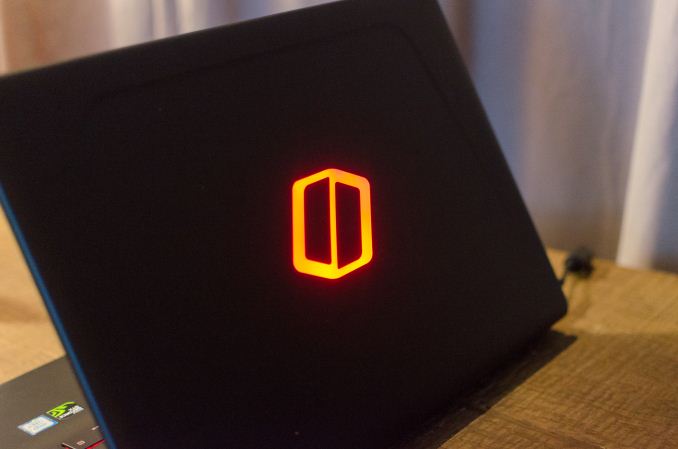 Interestingly enough, even though it wasn’t mentioned in the briefing there was also a 17 inch variant which allows for more SSDs and appears to have a GTX1070 but Samsung representatives noted that this variant is preproduction and that the GPU spec may change one way or another. It also appears to have a mechanical keyboard with RGB lighting for each key which is pretty neat as an upgrade from the Notebook Odyssey 15. 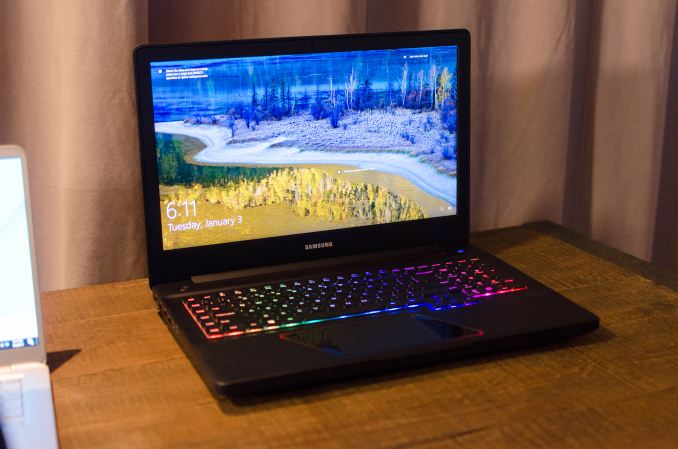 Finally, Samsung is announcing the Chromebook Plus and Pro. Both are 2-in-1 Chromebooks which feature a 360 degree hinge that makes it possible to fold the display similar to the Lenovo Yoga series. The Plus uses an ARM SoC while the Pro has an Intel processor as seen in the spec sheet below.

Both ship with a Wacom EMR stylus which allows for pressure sensitivity, and ChromeOS has a number of interesting tweaks in order to enable the use of the device as both a tablet and laptop like Android applications and automatic resizing to make things touch-friendly when the device enters tablet mode. 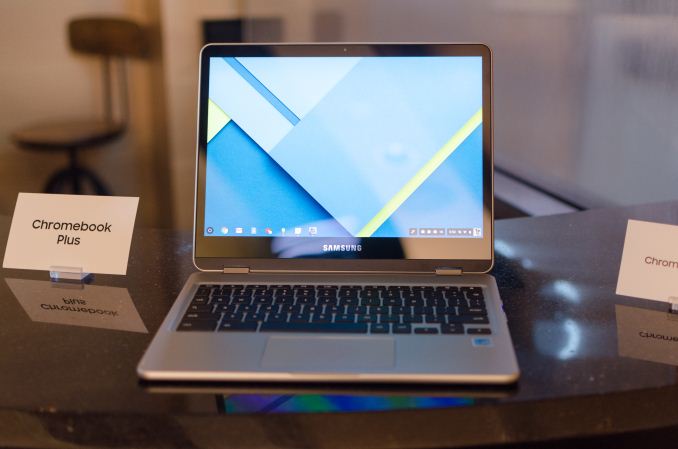 Interestingly enough, Google is leveraging their machine learning in order to reduce the latency of the input by predicting what the user intends to write. However, if you just draw random lines you will still see the full latency of the stylus stack. Google is also leveraging their machine learning capabilities to allow for highly accurate automatic OCR in Google Keep which can automatically convert handwriting to formatted text and make it easily searchable. For some reason neither has an ambient light sensor so there's no automatic brightness setting but there is an accelerometer and gyroscope for games and screen rotation. 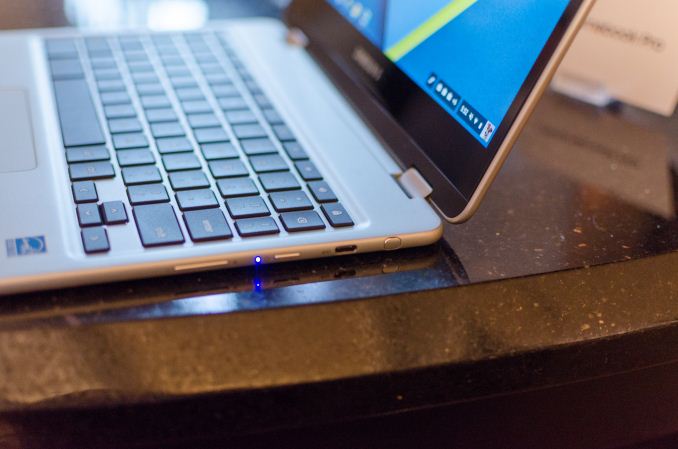 All of these products are planned to reach consumers Q1 2017.